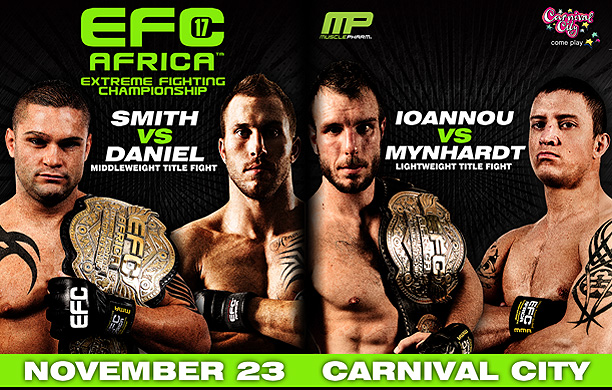 Johannesburg (South Africa) – EFC AFRICA will be returning to Carnival City’s Big Top Arena on 23 November for the last action-packed MMA spectacular of the year! Four exciting bouts have already been confirmed including two championship bouts that are not to be missed. Middleweight champion Jeremy ‘Pitbull’ Smith will face Darren ‘Double D’ Daniel, and Greek sensation and lightweight champion Costa Ioannou takes on Leon Mynhardt.

Smith (11-1) reckoned off with Garreth McLellan in a back-and-forth tussle at EFC AFRICA 12, when a guillotine choke in the fourth round secured ‘Pitbull’ the belt. Darren Daniel (6-1) recovered from a year-long back injury, showed his dominance at EFC AFRICA 15, when he demolished Tyron Rightford to claim the number one contender spot

Fan favourite and undefeated champion Costa Ioannou (5-0) will go head-to-head with dangerous striker Leon ‘The Iron Lion’ Mynhardt (11-5), who smashed his way to the number one contender spot.

Another exciting bout is the welterweight clash between Neil Diesel (2-1) and Dino Bagattin (9-3). Both are looking to make a statement with a big win in this competitive division.

Welterweight Martin van Staden (19-6) will face-off against Tenyeh Dixon (11-9), an athlete from Sierra Leone living in the US. Dixon will be making his EFC AFRICA debut and he looks to “go all the way” against the ground and pound fanatic from Durban, who is hungry for another win.

EFC AFRICA 17, presented by MusclePharm, takes place at the Carnival City Big Top Arena on 23 November. Tickets on sale at Computicket www.computicket.com from Thursday 4 October at midday, and tickets for the live broadcast to Nu Metro Cinemas available soon at www.numetro.com.