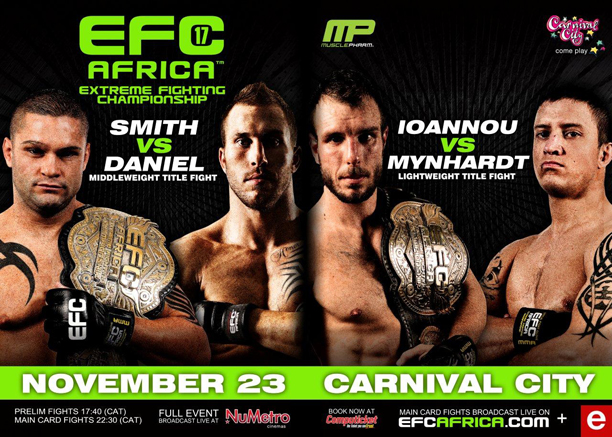 Johannesburg (South Africa) – The build-up to EFC AFRICA 17 has reached fever-pitch and fight night is finally here. Amongst the thirteen action-packed bouts are two epic title bouts. Jeremy Smith will take on Darren Daniel for the middleweight title, and the undefeated Greek sensation Costa Ioannou will face off against Leon Mynhardt for the lightweight title. The action starts at 17:40 at Carnival City’s Big Top Arena. All thirteen bouts will be screened live at Nu Metro cinemas which will also exclusively screen the ten preliminary bouts, and the three main card bouts will be broadcasted live on e.tv across Africa.

For fans in USA, Canada and the Caribbean, EFC AFRICA will be broadcast live on Fight NOW! TV, America’s only 24-hour combat sports and entertainment channel. Three main card bouts will be shown live from 22:35 CAT (16:30 EST).

Don’t have e.tv or Fight NOW! TV? All the main card action of Africa’s biggest MMA event is also just a click away at http://shop.efcafrica.com. Purchase the evening’s three main bouts for less than USD25 (only R195). Once purchased, bouts can be viewed as many times as you like within 24 hours. Bouts will be available for purchase before, during and after the event takes place.