Bagattin “Pleased” To Be Facing Jakobi

Neil Diesel Out Due To Injury 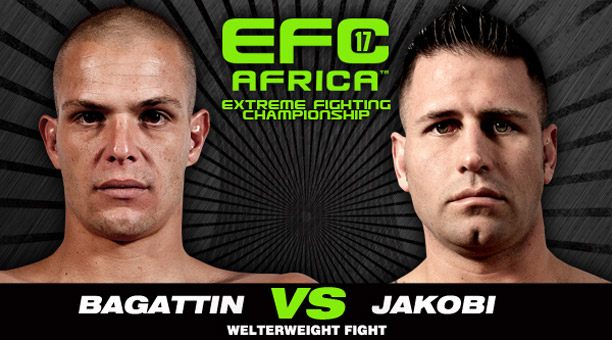 Johannesburg (South Africa) – Dallas Jakobi (6-3) will be making his return to the Hexagon on short notice to face Dino Bagattin (8-3) at EFC AFRICA 17 on 23 November. Bagattin’s original opponent, Neil ‘The Original’ Diesel, is unable to compete after he tore his rib cartilage in a sparring session.

Former champion Jakobi is keen to redeem himself after he lost the welterweight title to Jadyson Costa at EFC AFRICA 13 in April this year. With his aggressive fighting style, Jakobi is ready for Bagattin. “I’m keen to fight again. I have been out of the Hexagon for way too long, and the fans can expect a tough fight from two athletes looking to make their way to the top of the rankings and get a shot at the title,” says Jakobi.

Although the late change of opponent means a quick adaption in stratergy and training for Bagattin, the traditional striker is quite pleased with his new challenge. “I originally wanted to fight Dallas. He is a world class athlete and I know he will bring his best, and I thank him for accepting the challenge on such short notice. I am a little upset that Neil pulled out once again. He must stop calling out athletes and go away. He can talk when he gets his head back into the game, but I hope he heals soon. It’s an uncomfortable injury to have,” says Bagattin.