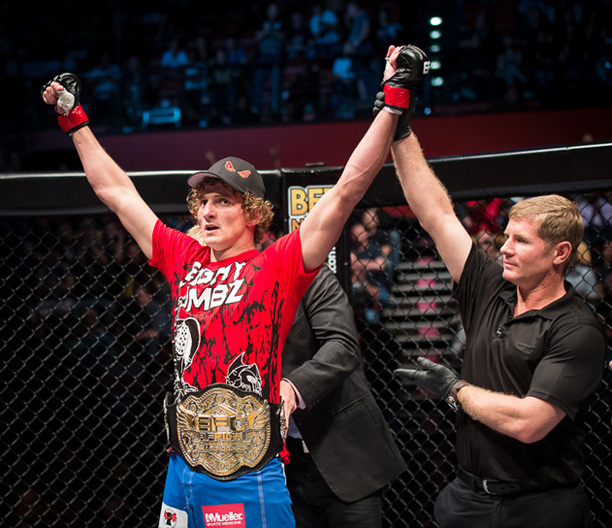 Johannesburg (South Africa) – In what many believe to be the biggest surprise outcome in EFC AFRICA history, the welterweight division’s ‘dark horse’ Michiel Opperman submitted the BJJ black belt Jadyson Costa at EFC AFRICA 16, stunning fans and claiming the title of the top welterweight in Africa.

Opperman, a world champion striker, has developed his wrestling and Jiu-Jitsu to such a high standard that he has won his past four fights via submission, including the rear naked choke victory against Costa.

On an eight fight winning tear and no signs of slowing down, Opperman intends on keeping the belt in this very competitive division. “I am really honoured to be the champ, and now the hard work starts to stay the champ. No wonder nobody has been able to successfully defend the title in this talented division,” says Opperman.

Usually not pushing the pace early in the bout, Opperman displayed an entirely different fighting style when he aggressively took the fight to Costa. According to Opperman it was all part of his game plan. “I knew it would be very tough to beat Jadyson if he gets into his rhythm. The game plan was to work the clinch, then when I had the chance for a choke I said to myself to just try it for a short while, and if it didn’t work I need to get back on my feet. Luckily I got the tap!,” says the champ.

Even with his momentous achievement of becoming champion, as well as his goal to defend his title, Opperman still has even loftier ambitions: “I still want to climb Mount Everest!” Best he attempts all his climbing in broad daylight since he has admitted that he is terrified of the dark! “I hate the dark, big time!,” says Opperman.

The Pretoria-champ has no break or vacation in sight, as he was back in the gym the Monday after his victory to support Leon Mynhardt in his training for his lightweight title fight against Costa Ioannou in November. “I can never really take a break, I miss my friends too much.”

Opperman is ready to take on anybody but he is especially looking forward to facing Martin van Staden. “This should be an interesting one – again!”