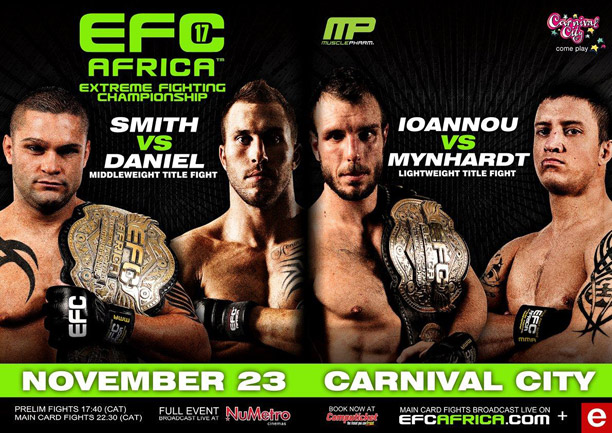 Johannesburg (South Africa) – It’s fight week with just days to go until EFC AFRICA 17 takes place at Carnival City’s Big Top Arena. With thirteen exciting bouts and a star studded fight card, including two title fights, EFC AFRICA 17 is pitted as the most anticipated event to date. Jeremy Smith and Darren Daniel will battle it out for the middleweight title, and Greek sensation Costa Ioannou and Leon Mynhardt will go head-to-head for the lightweight title.

To get a taste of the electric MMA atmosphere before fight night, get down to the Mardi Gras Theatre at Carnival City on the 22nd of November for the official live weigh-in. Weigh-in will start at 13:45. Entrance to the public is free, so come and show your support for your favourite EFC AFRICA athletes.

Here is how to make sure you don’t miss one kick, slick submission or hard-hitting blow.