‘The Bull’ Rages Towards International Award

Your Champion Needs Your Vote 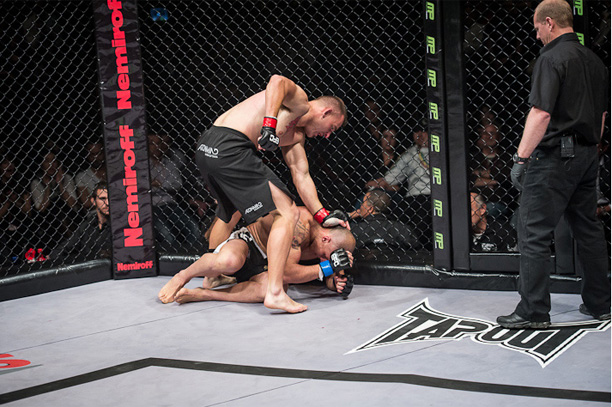 Johannesburg (South Africa) – JP ‘The Bull’ Joubert, the EFC AFRICA light heavyweight champion, has been nominated for ‘Comeback of the Year’ at the international Fighters Only awards. The world’s leading MMA magazine has confirmed the nominations for its fifth annual Awards happening in Las Vegas in January, and Joubert has made a top 5 spot.

Joubert took a pounding in the first round of his championship bout against Norman ‘Chef’ Wessels at EFC AFRICA 15, where an elbow to the forehead fractured his skull. ‘The Bull’ miraculously fought back in the second round and in a blistering display of will and determination, landed a barrage of hooks and uppercuts to knock out Wessels and claim the light heavyweight title.

Joubert is in his element about the nomination and proud of how he surged through his ordeal. “I have a dysfunctional attitude so in the first half I was being a little girl, but half way through I heard the voices in my head motivating me to make my opponent cry like a little girl. And I really hope to get tickets to go and see the show!” says Joubert.

In order to win this prestigious award Joubert needs you, the EFC AFRICA fans, to vote for him! To vote for Joubert, follow the link http://www.onlineawards.co.uk/fightersonly/home.asp and click on “Vote Now” where you will also be able to vote for other nominees in different categories.
The Fighters Only Awards gives fans across the globe the opportunity to cast their vote on which athletes, brands and industry professionals have made the greatest impact on the sport over the previous twelve months. Fans can vote across 22 categories including Fight of the Year, Knockout of the Year and Submission of the Year.