‘The Punisher’ versus ‘El Diablo’ 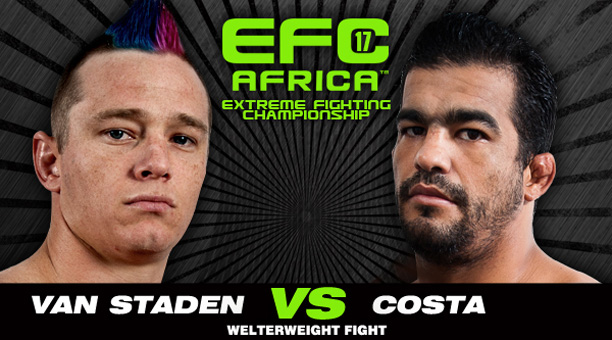 After Costa lost his belt to Michiel Opperman at EFC AFRICA 16, he is eager to get back into another fight and redeem himself. The Brazilian Jiu-Jitsu expert always dishes up surprises in the hexagon, and Costa reckons his fight against Van Staden will be “no problem” at all. “I am very excited. I have the same amount of respect for all my opponents and I promise to make my fans happy with my victory over Martin,” says Costa.

‘The Punisher’ submitted Dino Bagattin with a D’Arce choke in the third round at EFC AFRICA 15, and he only has a shot at the title in his sights. “I’m really excited about the Jadyson match-up. Looking forward to exposing his stand-up and giving him a beating as I’m on my way to my title shot,” says a confident Van Staden.