Ioannou Dominates And Gets The “Yes” 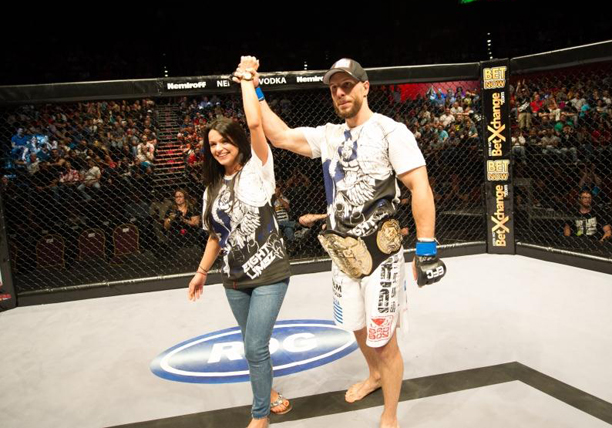 Johannesburg (South Africa) – Costa Ioannou’s Greek army turned up in full force to support their champion at EFC AFRICA 17 in what turned out to be the biggest night of his life. Ioannou went head-to-head with the dangerous striker from Pretoria, Leon ‘Iron Lion’ Mynhardt, for the prestigious EFC AFRICA lightweight title.

The undefeated Ioannou instantly closed the gap and took the fight to the mat, where he dominated with a world-class display of skill.
“I was expecting to trade a bit with Leon as we started out. All I remember is him standing dead still and not throwing, so I shot,” reflects Ioannou. “After that I did what I wanted to do, pacing myself and working for finishes. Unfortunately I didn’t want to lose position or get into a scramble so I never got the right angle on my kimura’s.”

Mynhardt held on through countless chokes and submission attempts but Ioannou got the tap with one second to go in the first round.
“Wow he has a great rear naked choke defence! After he defended and survived so many times I decided to choke with the opposite arm, hoping he didn’t have as good a defence that side, and I was right. Leon is really a super tough opponent!” said Ioannou.

After the impressive win Ioannou was not done for the night. The champ got down on one knee in the Hexagon and proposed to his beautiful girlfriend, live on TV with millions of fans watching around the world. “It was a world first for MMA and hasn’t been done before anywhere in the world, also being the person I am and doing what I do, it was the perfectly suited proposal for us,” says the groom-to-be.

Despite wedding plans that need to be tended to, Ioannou has big plans for 2013. He would like to fight numerous times next year and is eagerly waiting to see who his next opponent will be, since he has powered through almost all the contenders in the lightweight division. Ioannou wants all his fans and potential contenders to know that “Costa is coming faster and harder in 2013 than ever before!”

EFC AFRICA 18, presented by MusclePharm, takes place at the Carnival City Big Top Arena on 1 March 2013. Tickets on sale at Computicket www.computicket.com and tickets for the live broadcast to Nu Metro Cinemas available at www.numetro.com