Pena VS. Nel Is On

‘The Wolf’ Clashes With ‘The Animal’ For Featherweight Gold 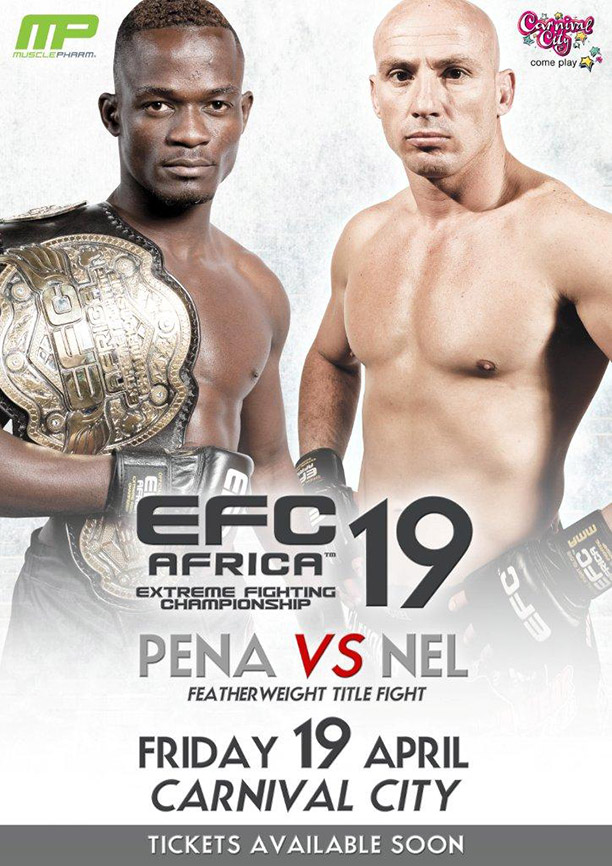 Johannesburg (South Africa) – This week it was confirmed that the featherweight title will be up for grabs at EFC AFRICA 19. Champion Demarte ‘The Wolf’ Pena will clash with former lightweight champion Wentzel ‘The Animal’ Nel, in what is said to be Pena’s toughest test to date.

Africa’s top two featherweights have been on a collision course for months, and were supposed to square-off at EFC AFRICA 16 on 19 October, but Nel withdrew due to injury just weeks away from the championship bout.

Renowned for his massive slams and aggressive style, Nel was suffering from a severely pinched nerve in his back late last year, but is recovered and set to take on the Angolan phenom. “I have been back in training since December and am 110% ready to go.” said Nel. “Fans can look forward to seeing ‘The Animal’ at his best. I have been a champion before and want it again; I will make the most of this opportunity.”

Pena, undefeated in five straight bouts, relishes the opportunity to show why he is the number one featherweight on the continent. “I’m very happy that Wentzel has recovered and is ready,” said Pena. “I have been preparing to fight him for a long time now, and am looking forward to facing a good wrestler as well as putting all my training into practice.” Pena concludes with, “Wentzel is a worthy opponent but I will remain the champion.”

EFC AFRICA 19, presented by MusclePharm, takes place at the Carnival City Big Top Arena on 19 April 2013. Tickets will be on sale soon at Computicket, and tickets for the live broadcast to Nu Metro Cinemas will be available soon.