Champs And Rivals Give Their Prediction

Epic bouts await EFC AFRICA 18, see what they have to say. 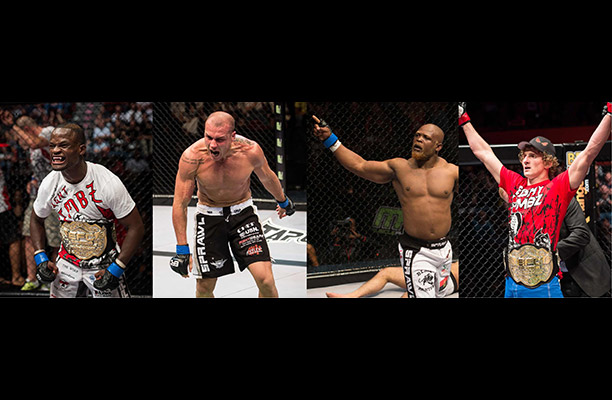 Johannesburg (South Africa) – The EFC AFRICA 18 clock is ticking, and the first mixed martial arts event of the year features a massive line-up of fights. The most dangerous man on the continent, heavyweight champion Ruan Potts goes head-to-head with iron jawed Andrew van Zyl in the most anticipated title fight rematch in African history.

A number of EFC AFRICA champs and rivals gave their personal opinions and predictions on the main card title fight, as well as the other two explosive main card bouts between featherweights Abdul Hassan and Gareth Buirski, and welterweights David Buirski and Tyron Rightford. Fight fans across the world will watch these epic clashes unfold, presented by MusclePharm, broadcasting live from the Big Top Arena at Carnival City on 1 March.

Potts vs. van Zyl
“Potts is a very clever fighter, he has a good game plan and knows how to win. He is going to win in the 3rd round via submission, however Andrew is a tough fighter and he can take punches. If Andrew can keep the fight standing, he has good chance of winning.”

Hassan vs. G. Buirski
“Gareth’s overall ground game is good and he has strong punches with knock out power, however Hassan is a better grappler with a lot of submissions. Hassan will have better control of the fight. I think the fight could go to round 3 with a unanimous decision.”

Rightford vs. D.Buirski
“Tyron is going to knock David out in the 2nd round!”

Potts vs. van Zyl
“Andrew van Zyl will push the pace and exploit all the areas that Potts lacks. He’s not going to buckle under pressure like he did in their last fight. He is mentally and physically prepared. I think he’s going to win by TKO! I am looking forward to seeing a change in the championship as I think that Ruan Potts is overrated in this division.”

Hassan vs. G.Buirski
“Gareth Buirski is going to be hard work for Hassan, he’s going to make it an unorthodox fight for him. Gareth is just going to be too difficult to handle and control!”

Rightford vs. D.Buirski
“David is big and strong in this division so I see Rightford losing by TKO very early in the 1st or 2nd round.”

Potts vs. van Zyl
“Potts is going to win this fight! He is as good as any UFC athlete, he is keeping the title!”

Hassan vs. G.Buirski
“Gareth is going to win this one, he’s training with one of the best! He is ready and equipped!”

Rightford vs. D.Buirski
“David is taking this one, he’s also training with the best!!”

Potts vs van Zyl
“This is a difficult one as Andrew has only lost once before and it was to Ruan, I think he is out for revenge! I think Ruan is fit and healthy which makes him very dangerous. I think the W is going Ruans way in the 3rd round, but he is going to have to work very hard for it!”

Hassan vs G. Biurski
“Hassan is very talented fighter with a big heart and lots of skill! Gareth is tough as nails and super fit! I think that Hassan will out skill Gareth but it’s going to be a 3 rounder! Hassan by spilt decision.”

Rightford vs D. Biurski
“This is a interesting one as these are both up and coming fighters in the WW division. If David can attack from the beginning and get Tyron on his back foot, he stands a very good chance! I give it to David by GNP in the 1st round.”