EFC AFRICA’s stunning girls reveal what they are expecting at EFC AFRICA 18. 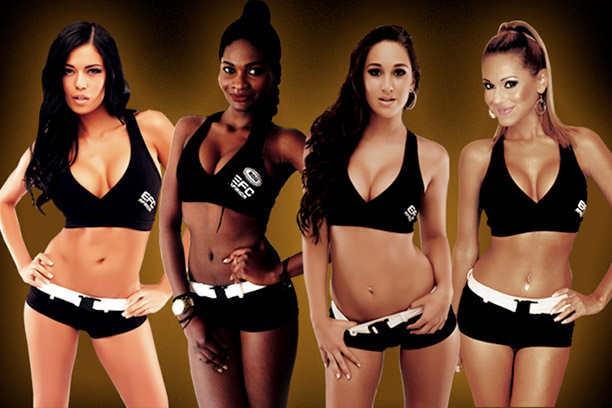 Johannesburg (South Africa) – On March 1 the hottest attraction outside the Hexagon, the EFC AFRICA girls – Eno Akpan, Naomi Das, Riana Roberts and Victoria De Lima – will once again be cage side, providing an exquisite backdrop to the action on both sides of the fence. Here they answer some questions on the coming highs of fight night:

Which fight are you most looking forward to on March 1? Why?

Eno: I’m looking forward to the main fight between Ruan Potts and Andrew Van Zyl. They’re both excellent fighters, if you ask me it’s going to be the toughest of the night!
Naomi: The title fight! It’s the most stressful one of the evening. The guys are fighting for a title so you can just feel the tension between them. I LOVE IT!
Riana: Potts versus van Zyl, definitely.
Victoria: I’m looking forward to Hawkey, Weyer versus Wilken and Jakobi versus Cheboub. There’s going to be some good striking for an exciting three rounds. I really look forward to unexpected knock outs!

What’s your favourite thing about being a part of EFC AFRICA events?

Eno: It’s all about the thrill and excitement.
Naomi: It’s the hype and tension up until the actual event. I love feeling the energy around the Hexagon. The whole atmosphere of being in the arena with everybody does it for me, like a modern day coliseum.
Riana: It’s the crowd, and being able to sit up front, getting a close view of the fights.
Victoria: EFC Africa events give people the chance to come and see what these athletes work so hard for. The live shows also always bring the unexpected.

Who’s your favourite fighter at the moment?

Eno: Ruan Potts. He’s level-headed, a true champion.
Naomi: I don’t have a favourite. They’re all pretty cool guys.
Riana: I’d say Darren Daniel. He’s an amazing fighter. I was disappointed to see him lose his last fight, but that’s the way it goes.
Victoria: I don’t have a preference at the moment. Each weight division has its own unique strength and talent. That said, I enjoy watching the smaller MMA athletes for their speed and agility, but then I love the bigger guys for their knockout power.

Any words for any of the fighters?

Eno: I’m proud to be associated with amazing fighters like you all. You are all champions. Keep up the good work!
Naomi: Keep going even if you get knocked down!
Riana: I wish van Zyl good luck.
Victoria: Finally, fight night is almost here! All the hours and preparation are going to pay off! Keep your hands up and may the best man win!

Any words for the fans?

Eno: Big thanks to you all for your support and encouragement. Keep it up!
Naomi: Keep supporting MMA in Africa, and us ring girls too!
Riana: Come, watch and enjoy!
Victoria: Arrive with an open mind and keep on supporting the art of MMA.

What do you love most about MMA?

Eno: The drive and determination of the fighters and their unique style of fighting.
Naomi: I love the different fighting styles you get to see used in the Hexagon.
Riana: I love the energy, the crowd and the discipline of the fighters, what it takes to compete.
Victoria: The versatility of the sport leaves one not knowing what to expect.

What annoys you the most about MMA?

Eno: The blood spills and injuries sustained during fights.
Naomi: Foul play in the ring annoys me! WTF?!
Riana: It’s not great when someone gets injured, and if there’s any blood or anything then I generally turn away. I don’t want to see anyone get hurt or carried out of the Hexagon.
Victoria: The ridiculous politics. It stunts the growth of MMA in Africa and causes people to create stereotypes.

Would you ever consider getting into the cage yourself?

Eno: No.
Naomi: Hmmm…possibly.
Riana: Definitely not!
Victoria: I respect the art of MMA but for me, personally, I prefer to be a spectator.

The EFC AFRICA girls are proudly brought to you by RDG.