Hollywood Enjoys Words Of His Own

“He’s a monkey…” says Abdul Hassan, ‘…I guess I’ll bring him some bananas on the night of the fight.” 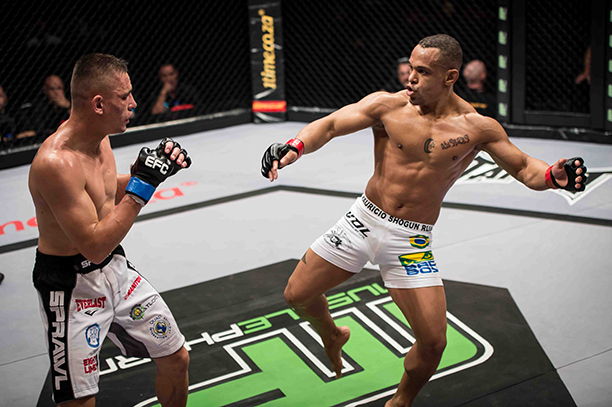 Johannesburg (South Africa) – On Monday 18 February Tyron ‘The Rush’ Rightford laid down a challenge to David Buirski, his opponent at EFC AFRICA 18, liking his fighting style to that of a ‘headless chicken’ and casting serious doubt on his ability to deliver on his stand up reputation. Today Abdul ‘Hollywood’ Hassan has thrown further chum in the Buirski tank, calling out brother Gareth with more divisive tactics.

“For someone that closes his eyes and swings blindly like a monkey,” says Hassan, “he should be considered to be one of the luckiest fighters in the EFC. As for my strategy, it’s simply that I’m going to try not to fall asleep … difficult with monkey ears bouncing around in the cage.”

In response to Buirski’s famed fitness levels, as evidenced in his supercharged, three round wars against both Iakobidze and Griessel, Hassan (known for three round wars himself) has this response: “I’m not concerned. I do not see that as a threat. Whether it goes the full three rounds or whether I end it in the first, either way it ends with my hand in the air.”

Whether straight tactics or total disrespect, it’s impossible to deny that the stakes for this fight have skyrocketed. It’s the first time that two brothers are featuring on the same EFC AFRICA main fight card, and the first time that such blatant disrespect has been shown to both. Things have gotten personal.

“What do you say to a monkey?” says Hassan. “I’ve got nothing to say to him. I guess I’ll bring him some bananas on the night of the fight. There are a lot of extremely skilled fighters in the lightweight division. I feel that I have proven myself. I should be next in line for the title shot.”