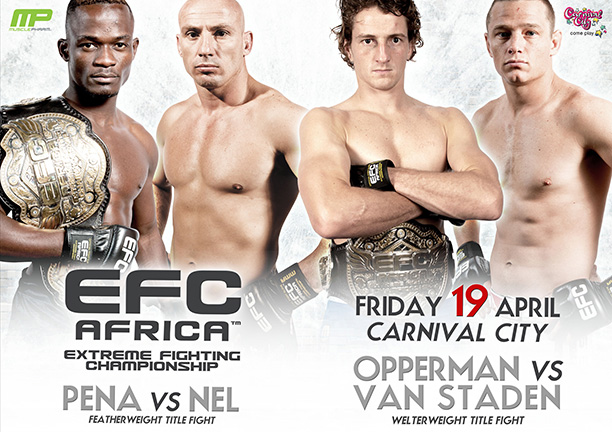 Johannesburg (South Africa) – Another colossal title bout has been added to the EFC AFRICA 19 fight card. Champion Michiel Opperman, who is undefeated in the EFC AFRICA Hexagon, will face off with Martin ‘The Punisher’ van Staden for welterweight gold, in what is expected to be a total onslaught of action.

This anticipated co-main event joins with Demarte ‘The Wolf’ Pena vs. Wentzel ‘The Animal’ Nel for the featherweight title, promising fans two of the greatest title bouts in African MMA history.

Van Staden, whose only loss in the EFC AFRICA Hexagon is at the hands of the current champion, and has since been on a winning tear by dispatching of Dino Bagattin and former champion Jadyson Costa, now has his first shot at championship glory.

Opperman has ploughed through every opponent and is riding a remarkable eight fight win streak. The champion clinched the title at EFC AFRICA 16 by submitting Costa, a BJJ black belt, and has no intention of slowing down.

It was a frantic battle when these two warriors last met at EFC AFRICA 13 in Cape Town, ending with Opperman sinking in a guillotine choke and getting the submission victory. How will this rematch unfold now that championship gold and glory is on the line?

EFC AFRICA 19, presented by MusclePharm, takes place at the Carnival City Big Top Arena on 19 April 2013. Tickets will be on sale soon at Computicket , and tickets for the live broadcast to Nu Metro Cinemas will be available soon.