Dallas Jakobi is set to drop another weight class to fight Alex Cheboub at EFC AFRICA 18, a potentially controversial move that puts the whole division in perspective. 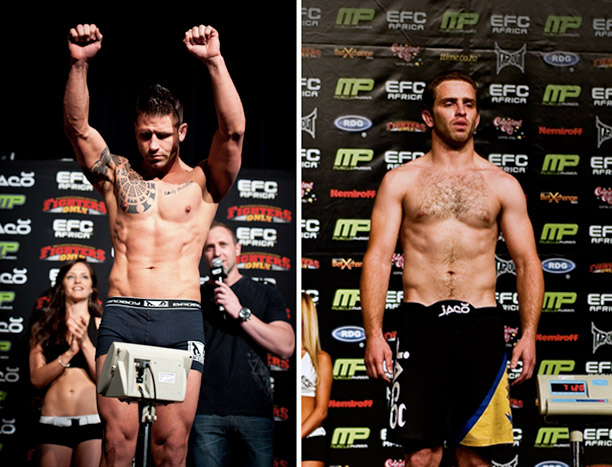 Johannesburg (South Africa) – On March 1  Dallas Jakobi will make his much anticipated appearance at lightweight against Alex ‘The Professor’ Cheboub. It’s a move that holds much promise for an athlete making his second division cut since his EFC AFRICA debut, and the possibility of failure.

“I feel lightweight is better suited to my body type and the increasing competitive nature of the sport,” says Jakobi in explanation of his decision, “it’s a competitive division with a lot of talent.”

“To put it in perspective,” says Graeme Cartmell, matchmaker for EFC AFRICA, “our current lightweight division houses uncontested title holder Costa Ioannou, plus Jadyson Costa, Leon Mynhardt and Alexander Cheboub. Then there’s a world talent like Don Madge who’s on a one-way track to challenge for the belt. Adding a former titleholder like Dallas to this mix, with his tenacity and experience, will ground and test the division’s leaders as well as provide some damn exciting fights for the fans.”

Where Jakobi was often at a height and reach disadvantage in the welterweight ranks, at lightweight he should enjoy an immediate reversal of fortunes.

“For his height I think it’s a great move,” says Cartmell, “for his career a challenging one and for him as an athlete an exciting opportunity not have the size issue hanging over his head.” “Also,” adds Cartmell, “the current roster of EFC AFRICA lightweights have only ever competed at welterweight as their heaviest fight weight. Dallas has fought Darren Daniel at middleweight. He brings a vast amount of strength to the table.”

Not all agree that the move is a prudent one, however. Alex Cheboub, his opponent on March 1, has this to say:

“I think that it is a major cut for him. The guy has a broad frame. He used to walk around closer to 90kg. He is focused and does train hard but I think that he will lose strength and possibly endurance from such a cut.”

In terms of the rest of the division, Cheboub also has a point to make: “I am currently ranked about number five,” he says, “and I feel that is about right based on recent history, but, I do think my fight experience, record and quality of opponent should put me ahead of Don Madge, and it feels strange that Speechly is ranked so high after making the cut from welter.”

Bigger picture division movements aside, is the weight cut realistic? It’s interesting to note that Cheboub himself has failed to make weight on his last two outings, while Jakobi has never been in that position.

“My weight is currently around 73kg and I am on track to make weight,” says Cheboub, adding: “I failed to make weight against Leon [Mynhardt] due to a misunderstanding. I was aiming for 70.5kg, after which the limit was dropped.”

“I have never missed weight,” says Jakobi in response. “This is a professional sport that requires a professional attitude. I would not have signed to fight at this weight if I was not willing to do whatever it takes.”

“Very few people know,” adds Cartmell, “that he [Jakobi] requested to move to lightweight after the Jadyson Costa loss. He was in the process of cutting his last few kilos in a test cut to 70kg just before the fight was offered.”

While it seems that Jakobi will be able to clear the weight it’s important to remember that if either athlete fails there will be consequences. Should Dallas succeed he will immediately gain advantage, sending a clear message of his intent in the face of Cheboub’s past misses, and should either (or both) fail, penalties will be levied.

“[Any fighter that] misses weight will be financially penalized,” says Cairo Howarth, EFC AFRICA president and holder of the last word on such matters. “The fight may not even take place,” he adds, “and it will affect [that fighter’s] future prospects.”

Whatever happens, come weigh in on February 28 both fighters will have the chance to prove their point and send a real message to the rest of the division.

“I have nothing to say to Cheboub,” says Jakobi in response. “Come EFC18 I’m going to stamp my name on this lightweight division. I will be a force to be reckoned with.”