“There’s No Way He Wants To Keep It Standing”

Rightford is unimpressed at the striking threat David Buirski offers, and predicts a thrashing. 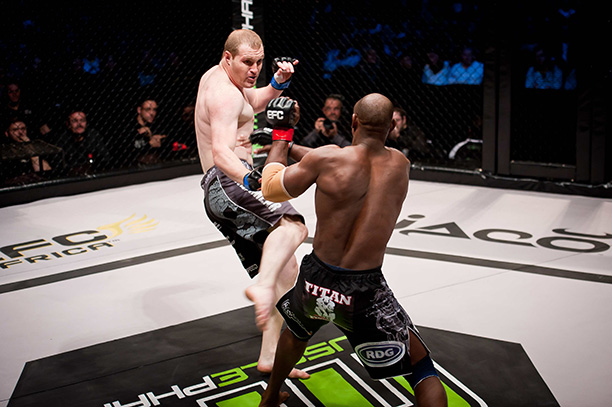 Johannesburg (South Africa) – On March 1 Tyron ‘The Rush’ Rightford returns to the hexagon to face David Buirski in what most are predicting to be a striking war of note. Coming off of a loss to Darren Daniel at EFC AFRICA 15 Rightford is in no mood to pull punches, and happy to declare war.

“I don’t think David has half my hand speed or the hand speed of the guys I’m in camp with at the moment,” he says. “I know he’s going to shoot for a takedown from the start, there’s no way his camp will want him to keep it standing.”

Currently sitting on an EFC AFRICA record of 3-1 to Buirski’s 1-1, Rightford has a slight edge in the high pressure experience stakes but believes that ultimately it’s his understanding of his opponent’s game that will make the difference.

“He bases his fighting around making his opponent lose patience,” says Rightford. “He gets him annoyed, jumping around like a headless chicken, then [he] catches him on the counter or off balance. That’s no concern for me at all. I’ll be controlling the fight from the start; I’ll decide where I want the action to take place.”

“As much as everyone talks about his stand up being so good,” he continues, “I think it’s not even close to any of the previous opponents I’ve faced in the middleweight division.”

On his previous loss to Darren Daniel, Rightford has this to say:

“You shouldn’t fight when you have bronchitis, no matter how much you think you can do it! I want a rematch with him. I’ve got unfinished business with that punk!”

In this kind of mood it’s certain that there’ll be nothing less than fireworks when The Rush enters the cage, and pain for all concerned.

“He’s not a bad fighter,” says Rightford of his opponent, “if he’s strong and fit. Fans can look forward to a good fight with skills that I’ve not shown in my past. Get your tickets because you’ll want to be there live for this one!”