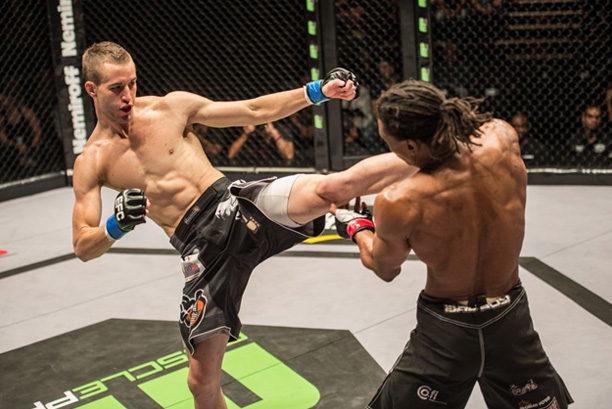 Many would have expected Abdul Hassan, fresh from a victory over Buirski, or Wesley Hawkey, to be offered a bout against the first in line for a title shot, but both Hassan and Hawkey were unavailable at the time of signing.

“Initially we were looking to place Allen and Wesley in this fight,” says EFC AFRICA matchmaker Graeme Cartmell, “but unfortunately Wesley had commitments that made the confirmation of the fight impossible at the time. With Abdul currently battling a health complication, we reached out to Gareth as the next suitable contender, who agreed immediately.”

“I’m happy to fight a top contender,” says Buirski. “I’m a fighter, all I want to do is fight.” “It’s a great opportunity,” he adds, “and this time I won’t be leaving it to the judges.”

Allen, undefeated in the EFC AFRICA hexagon, is seen as the top contender in the featherweight pool with three straight and comprehensive wins over Donald Nzirawa, Alain Ilunga and Amos Hlatshwayo. However, with current champion Demarte Pena his stablemate at Fight Fit Militia, his road to a title shot is a complex one. For now, though, Allen is thinking only of his next fight.

“I’m going to put pressure on him,” he says of Buirski. “I’m looking forward to letting my hands go. I expect him to close the distance, that’s the kind of fighting his body type is made for but if he does try to stand with me that’s going to be to his dismay.”