A time for both to prove their worth 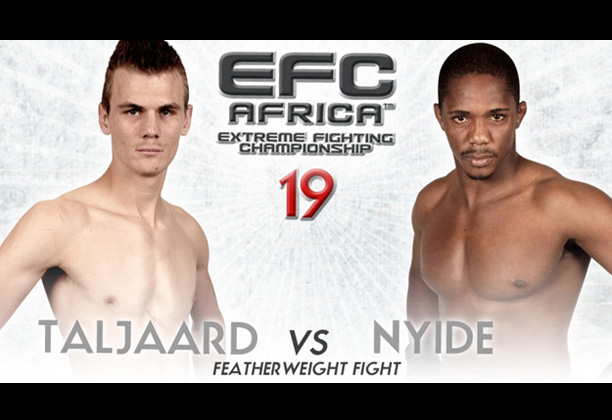 Johannesburg (South Africa) – Markus Taljaard is to take on Peter Nyide at EFC AFRICA 19, to be staged at Carnival City’s Big Top Arena on April 19. For both it’s an opportunity to show their true worth.

‘Markus Taljaard is a huge talent,’ echoes EFC AFRICA matchmaker Graeme Cartmell. “He has fought massive fights and shone incredibly. He fought a three round war with Wade Groth, submitting him in the third, and was putting on a hell of a show until Gareth Buirski floored him with a total haymaker.’

‘That KO doesn’t bother me,’ says Taljaard. ‘He got me, what can I say? Right now I’m training hard and I’m training smarter. All I can think of is getting into that cage.”

Peter Nyide is an athlete just as eager to give a true account of himself. Fighting out of the notorious Gorgeous Boyz Hardcore gym in Durban he boasts team mates no less impressive with ex-champion Dallas Jakobi, Abdul Hassan and Daniel Sinclair pushing him daily.

“Peter did an incredible job at his debut,” says Cartmell. “He took the fight on four days’ notice and at lightweight, even though his optimum weight is at feather. Giving up that kind of advantage is always a huge challenge. His loss doesn’t reflect what he’s capable of.”

With the opportunity to prepare and fight at his preferred division Nyide is fired up to do damage.

“I took the fight at lightweight because it has always been my dream to fight for EFC AFRICA,” says Nyide, “and it’s paid off. I’m wiser now and I’m fighting at my weight.” “Markus is a great standup fighter,” he adds. “He’s a good boxer, he’s taller than me so I’m going to be dealing with his reach, but it’s a challenge that I’m ready for.”