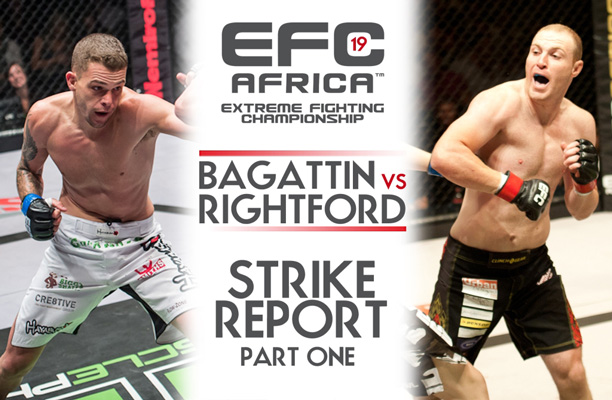 Johannesburg (South Africa) – At EFC AFRICA 19 Dino ‘The Lion’ Bagattin will face off against Tyron ‘The Rush’ Rightford in the first event of the main card. Both fighters are fearsome strikers, both have made bold showings in their EFC AFRICA past, and both have stated openly that this match is about more than just winning, it’s personal.

Dino Bagattin is an EFC AFRICA legend. In action at the very first EFC AFRICA event he delivered on his already strongly established international striking pedigree with a first round TKO of BJJ specialist Chad Hepburn. At EFC AFRICA 02 his first loss followed, a round one rear naked choke applied by Adam Speechly, but thereafter it was back to winning ways with Bagattin defeating Manny da Silva, Remo Ralph and Juan Lubbe – all by punch TKO and all in the first round. EFC AFRICA 12 brought Bagattin’s second loss in the hexagon, this time courtesy of a second round Michiel Opperman triangle, and so his pattern has continued. Bagattin has taken victory six of the nine times he’s entered the Hexagon, four by strike TKO and two by decision, and has tasted defeat three times, each by submission.

Tyron Rightford made his Hexagon debut at EFC AFRICA 09. Already a world champion Kykoshun Karate athlete, word of his hand-speed had begun to spread. He started things off with a thumping three round war with Tshikangu Makuebo, a battle he won by decision, and then went on to destroy Paul Terblanche and Jacques Joubert successively, each by TKO in the first with knee and punch strikes.

At EFC AFRICA 15 Rightford was handed his first loss. Darren Daniel came out determined and blitzed Rightford to the ground where much of the bout stayed, Daniel dropping heavy GnP while Rightford survived with a series of upkicks, ultimately only staving off the inevitable. The loss was isolated, and at EFC AFRICA 18 he returned to previous form with a first round punch KO of David Buirski.

As things stand on April 19 two committed strikers will face off against each other and neither, judging by their history, will be looking to take it to the canvas unless preceded by a knockout blow. These are stand-up specialists, among the absolute best on the continent, and in this matchup they’re free to do what they love most.

Assuming that the bout will stay standing, how are they likely to fare? Later this week, in BAGATTIN VERSUS RIGHTFORD, STRIKE REPORT Part 2, we’ll look at precisely what these athletes have delivered in the past, and how they can be expected to perform come April 19.