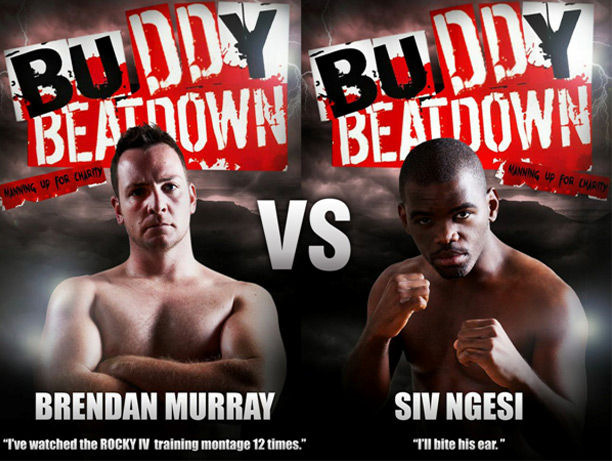 Johannesburg (South Africa) – Mike Mouneimne, head coach at Cape Town’s Pride Fighting Academy, is launching an initiative next week that blends charity, comedy, and good old fashioned fights. On Tuesday 30 April two Cape Town based comedians, Brendan Murray and Siv Ngesi, will square off in the main event of the evening with all proceeds going to charity. EFC AFRICA is supporting the event, offering a hamper as an audience prize, as is lightweight title contender Don ‘Magic Man’ Madge who’ll be a guest referee and be part of more audience prizes available on the night.

“The idea came about by accident, actually,” says Mouneimne. “Brendan asked if he could do private lessons with me as he was training, he and Siv wanted to fight each other. He wasn’t sure of exactly what they wanted to do other than they wanted to fight, had set a date, and thought it should be for charity. I offered to get involved, my wife and I came up with a slogan and we decided to do it at PFA.”

Kayla Glaser is the four month old baby of family friends of the Mouneimne’s. She is suffering from cystic fibrosis, an inherited, life-threatening disease for which there is currently no cure. The Buddy Beat Down team decided that they would donate all monies raised to her hospital care with an initial goal of raising R50 000. So far the team have managed to raise over R25 000 worth of prizes as giveaways on the night, and tickets have already sold out. Mike doesn’t believe the event will end on the 30th, though.

“Our goal is to grow the event as a brand,” he says. “Buddy Beat Down is aimed at challenging the rivalry amongst friends and turning it into a way to make money for those in need. It’s an opportunity for regular Joe’s to become someone’s hero while at the same time securing bragging rights over your mate.” “The charity will mainly target children’s initiatives as they cannot fight for themselves,” he adds. “We don’t want to limit our scope. We want to help as many people as possible.”

“Personally,” says Brendan Murray, “I want to stand toe to toe with another dude and bring on the pain. I want to know if I can take it and I want to know if I can dish it out. But really the only reason Siv and I are stepping into the ring is for a four month old baby girl who needs a ton of cash ASAP to help fight her cystic fibrosis. For her we’re both happy to take punches to the face in a roomful of our friends and let the winner be known far and wide. Bragging rights and a life are on the line, I hope he’s been training hard because I won’t hold anything back!”

In addition to the main event, fans will be treated to the entertainment of four local comedians and two exhibition MMA fights. Four of PFA’s fight team members will enter the ring, each sporting a Buddy Beat Down, one time only moniker. Mordy ‘The Bacteria’ Serraf will take on Danny ‘The Germ’ Matthews and Darren ‘I’m Too Sexy’ Hoffman will face Olaf ‘The Lof’ Marite. In the main event Ngesi and Murray will square off with 16oz boxing gloves for 3 x 3 minute rounds. A medical officer and professional ref will be in attendance, ensuring that all stays fun and games.

“Ultimately,” says Mouneimne, “we want to become a recognised organisation. We want to take the event to a bigger arena and raise substantial amounts for charity. We also want to challenge people to do the same and maybe step up to be a part of the next event.”

Buddy Beat Down 1 takes place at PFA on the evening of Tuesday 30 April. Although tickets are sold out a cancellation list is available, as well as the opportunity to contribute to Kayla’s cause anonymously. Follow all Buddy Beat Down developments at their Facebook Page, and click here to make your contribution to Kayla. Look out for a video to be posted online after the event.