Fighters Only SA brings you EVERYTHING to do with that fight 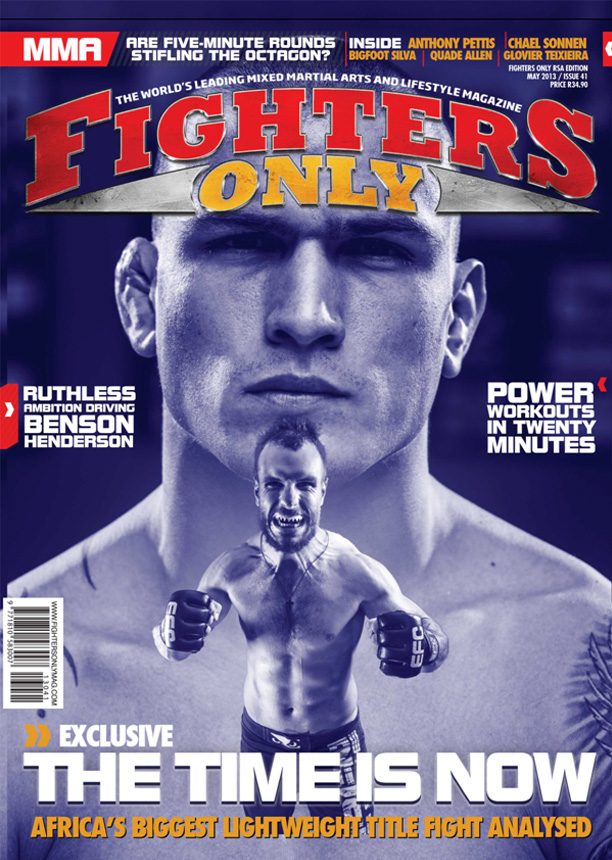 Johannesburg (South Africa) – At EFC AFRICA 20 Costa Ioannou will defend his lightweight title against Don ‘Magic Man’ Madge in a bout that has had African MMA talking like never before. This month Fighters Only SA brings fans a comprehensive feature on this fight, looking at it from all angles and quoting the main players to a searing degree of honesty. Below is an excerpt from the full, 10 page feature:

“Don doesn’t deserve to face me,” says Costa Ioannou, talking from the bench next to Fight Fit Militia’s Jiu-Jitsu mat, his coach Richie Quan by his side. “He’s on a one fight win streak, against Hector Britts. Hector’s good, but he’s not a top contender.”
It’s a Tuesday morning and Ioannou has just completed his first training session of the day, and signed the contract to fight Madge the day before. “When I got my title shot,” he says, “I fought the top, top contender at the time. Brendan [Katz] was 5-0, unbeaten. After him I fought Will Bentley who was the Fight Force champion. After that I didn’t feel I was ready for Wentzel [Nel] but I was pushed. I would’ve fought anyone else, I didn’t care.” “Skill wise,” continues Ioannou, “sure, maybe he deserves it. Credential wise, from his past, yes, maybe he deserves it … but he didn’t do what he has to. You can’t’ jump straight into formula one. You have to build yourself up.” He thinks a moment, shrugging his muscled shoulders before cracking a grin. “I’m doing a Rocky,” he says, chuckling. “I’m not saying he’s a bum, but on paper, he’s not a top contender. What do I say when my friends and fans say ‘he doesn’t deserve it?’”
“I wanted to fight Jadyson [Costa] at catch weight in June,” says the champ, musing, “and then maybe I could have fought Don in August, perhaps after he fought Leon [Mynhardt] again, but that didn’t work out. Hey, make no mistake, I’m happy to fight. I’m grateful for the opportunity.”

“You have to look at the fighter as a whole,” says Madge’s coach Mike Mouneimne, he and the challenger weighing in on a scratchy conference call from Cape Town the following day. “Don’s got an incredible amount of top level experience. In the EFC he’s got one KO victory, one submission victory, and a sketchy, controversial loss. You look at guys who are getting title shots, guys like Andrew van Zyl getting cannon fodder to fight then getting a title shot. It might be two victories, but it’s not quality fighters. Don’s bringing a different dynamic. The EFC see what he brings to the table in terms of talent, excitement, skill level. It’s a no brainer. Who else but Don?”
“When Costa won his title it was on his third fight,” says Madge, preferring to say little but making his words count. “He fought Brendan Katz. That was a good fight, he’s a good fighter. Then he fought Will Bentley, a journeyman, then he got a title shot. Why should it be any different with me? I fought Wade Groth who was a big prospect, I beat the shit out of him. I fought Leon and I had a three round war with him, I beat the shit out of him too and lost to a technicality. Hector Britts is a long time MMA athlete, I knocked him out in round one. I don’t see what everyone’s bitching about.”

Fighters Only SA Issue 41 is on sale at CNA, Spar, Pick & Pay, Exclusive Books, Game and most garage forecourts, now.