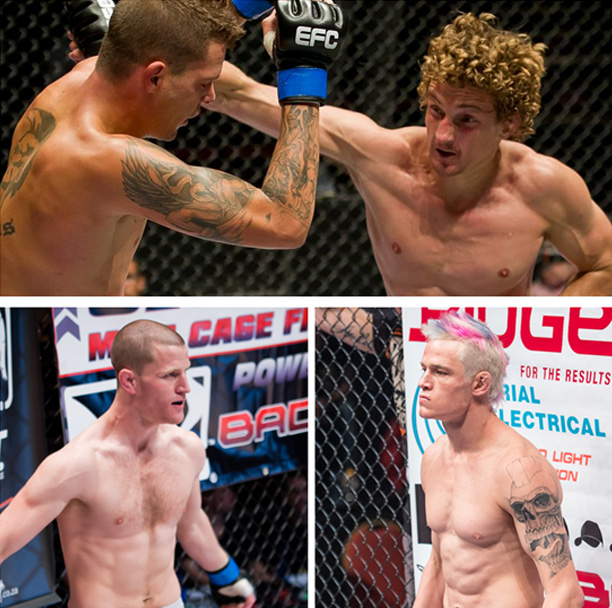 Johannesburg (South Africa) – Today African MMA was shocked to hear that Michiel Opperman has had to pull out of his coming title defense against Martin ‘The Punisher’ Van Staden at EFC AFRICA 19. Adam ‘The Prodigy’ Speechly has stepped in to face Van Staden instead.

Opperman suffered a second degree hamstring tear earlier this week, and despite his physician advising against it, had hoped he would be able to fight once the injury had settled. This morning a heavily strapped Opperman attempted a training session and found he was unable to continue. “We work with a book,” says Morne Visser, Opperman’s coach, “that our fighters make notes in after every training session, at the end giving themselves a score out of ten for how well they think they performed. About a year ago Michiel broke his hand in training. He had a bone sticking out of his flesh. He taped his hand up and said he’s going to finish the session before going to hospital, because he won’t allow himself to get a low score in his book. This is the kind of athlete we’re dealing with.”

“On Monday Michiel was wrestling with Tumelo [Maphutha]. Tumelo sprawled, but somehow Michiel’s heel got caught behind his leg, causing him to split. We all heard something crack. I did the standard test. Michiel couldn’t walk, but he could lift his heel. After discussing it with the doctor we decided we would wait until Friday before making a decision. Michiel did everything he could, medication, oxygen therapy, and rest.”

“On Friday he said he felt better, maybe at 50%. I put him in the cage to try some light wrestling and immediately I could see that he couldn’t perform. He begged me to let him fight, saying if he could get it to ground he would be able to function. But the truth is he can move forward, but not back. His hamstring can’t take any real weight.”

“He’s not happy,” he says of his fighter, “he’s devastated. But this is fighting, and this is life. Far worse things could have happened. He’s going to rest, and when he’s ready, get back in the ring.”

Martin Van Staden is disappointed at missing his title shot, and the chance to avenge his loss to Opperman, but looking forward to his bout with Speechly.

“He’s definitely going to shoot,” he says of his submissions specialist opponent, “but I’m sticking to my plan. If we go down we’re going back up again, because I want the KO, and I want to hurt him. I was angry before, now I’m pissed off. Speechly’s not as big, not as clinical as Michiel, he’s a little more slick on the ground, but I’m going to end him. I’m going to do damage.” “The belt has evaded me again,” he adds, “but it doesn’t matter. I’ll get it.”

“I’m amped, I’m excited,” is Speechly’s take. “Martin is a guy that comes to fight. He’s got no fear and that’s what I want, that’s what I train for. I’m going to take the opportunity, and relish it. Thanks to EFC AFRICA and Martin for taking the fight.”

“He [Opperman] is our champion,” says Graeme Cartmell, EFC AFRICA matchmaker. “He needs to heal up, and get ready. Michiel will be back in the cage soon. In the meantime, Van Staden against Speechly is going to be phenomenal. ”

EFC AFRICA 19, presented by MusclePharm, takes place at the Carnival City Big Top Arena on 19 April 2013. Tickets on sale at www.computicket.com and tickets for the live broadcast to Nu Metro Cinemas available at www.numetro.com.