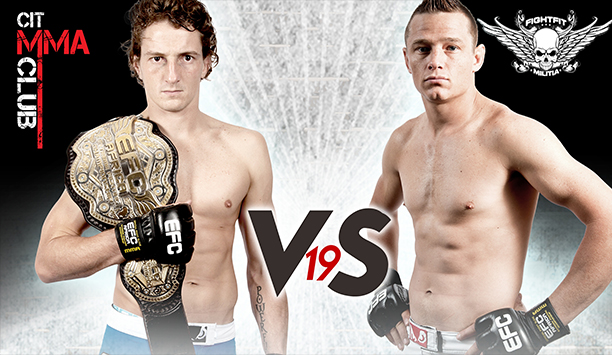 Johannesburg (South Africa) – At EFC AFRICA 19 there are two gyms representing more fighters than any other. Pretoria’s Team CIT are to face Johannesburg’s Fight Fit Militia in numerous encounters, making the EFC AFRICA 19 event another opportunity for these two to prove their mettle.

Fight Fit Militia has two athletes represented on the main card; reigning featherweight champion Demarte Pena and welterweight challenger Martin Van Staden, while featherweight fighter Boyd Allen faces Kanyeba Anicet on the prelim roster. Team CIT are represented by welterweight champion Michiel Opperman on the main card as well as Tumelo Maphutha, Markus Taljaard and Leon Mynhardt on the prelim. Johan van Staden, although a member of the Durban based Brothers Of Destruction outfit, is currently completing his preparations for his bout at FFM, making him an added, if temporary, member. In terms of numbers, then, it’s a four on four war.

Yesterday, in reporting on Johan van Staden’s current training at FFM, head coach Richie Quan had this to say about his Team CIT counterparts: “We’re a more professional outfit than they [CIT] are. CIT trainers are part time, this is our life. We eat, sleep and dream MMA. They don’t match us for professionalism, and they won’t match us in the ring.”

“Richie is 100% correct,” says Visser, head coach and owner at CIT, in response. “All my fighters do have day jobs. You cannot be considered fully professional if you don’t live off of your sport.” “They are the second best team in Africa,” he adds, “after CIT.”

When reminded of the fact that FFM have produced a total of four EFC AFRICA champions so far (Norman Wessels, Garreth McLellan, Costa Ioannou and Demarte Pena), and boast the most successfully champion of all in terms of title defences (Ioannou, three and counting), Visser was not phased.

“We have five world titles,” he says. “Seven African titles and 14 SA titles. Our gym is gunning for those EFC belts and we won’t be giving any up. In fact, we want all the EFC belts and I have a fighter in every weight category to make that happen.” “We have Markus Taljaard at feather,” he continues, “Leon Mynhardt at lightweight, Michiel [Opperman], already a champion, Tumelo [Maphutha] at middle and Ian Visser and Paul Kietzmann at light heavy and heavy.”

FFM boast serious contenders in all those categories bar one. At feather they already hold the belt, as at lightweight. Martin Van Staden is to challenge at welter at EFC AFRICA 19, Garreth McLellan stands at middle and Norman Wessels is a scary light heavyweight contender.

What, then, is the true state of the rivalry between these two great gyms? Visser chooses to answer with an example.

“One of my fighters came to me in the beginning of the year and said to me that the travelling from Joburg to Pretoria is killing him. I suggested the best gym to join in the Joburg area is FFM. I released him from his contract with team CIT to join the FFM team…” “We will always see whoever is in front of us in the cage as an enemy,” he concludes, “but after the fight it’s back to basics: Respect.”

Norman Wessels, co-owner and coach at FFM, couldn’t agree more. “They’re a good gym,” he says. “I respect what they’re doing there, and value it. Without quality opponents and guys putting their all into the sport we’d never be able to evolve. We’re going to fight them hard, then have a get together afterwards.”