The Bros Are Back 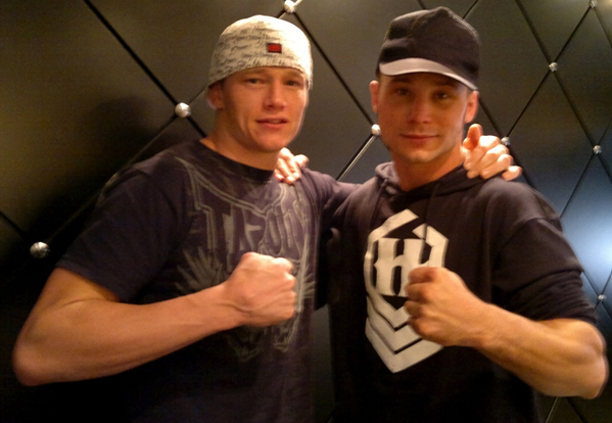 Johannesburg (South Africa) – EFC AFRICA 19 will once again see two brothers in action on the same night. Up and coming lightweight talent Johan ‘The Gun’ Van Staden is to take on the legendary Leon ‘Iron Lion’ Mynhardt in a prelim bout, while older brother Martin is to challenge Michiel Opperman for the welterweight title. Both opponents hail from Pretoria’s notorious team CIT while Johan is currently in Johannesburg, completing his fight preparations at Fight Fit Militia, his older brother’s training camp.

“I haven’t changed camps,” says Johan in an interview given yesterday, “I’m just up here to adjust to the altitude two weeks before my fight. But I’m very happy. It’s a good camp, good guys to spar, train with and roll.”

On his coming matchup with Mynhardt, Van Staden junior has this to say: “The plan, well that’s simple… train hard. No doubt he [Leon]’s fit. No doubt he’s good, but I’m working on one or two surprises.”

Van Staden admits that fighting an athlete of Mynhardt’s calibre and reputation is an honour, and an opportunity that offers him a lot, should he win. “If I beat him then everyone’s going to know who I am,” he says, “it’s a big leap.”

On the question of the relative merits of the two camps, Richie Quan, head coach along with Norman Wessels at the FFM facility, had no need to pull punches. “We’re a more professional outfit than they [CIT] are,” he says. “CIT trainers are part time, this is our life. We eat, sleep and dream MMA. They don’t match us for professionalism, and they won’t match us in the ring.”

Is Johan looking to make a permanent move to Johannesburg and the Fight Fit camp? Both brothers are happy to be optimistic, however they agree that it’s an idea for the future. “Anything can happen in the next few months,” says Martin, “we’ll have to wait and see.”

“My boet’s looking in the best shape I’ve ever seen,” says Johan, “and I appreciate that he’s looking after me. I love him to bits.” “I’d like to fight everybody,” he adds, “but for now I’m going to give it my all and see what happens from there.”