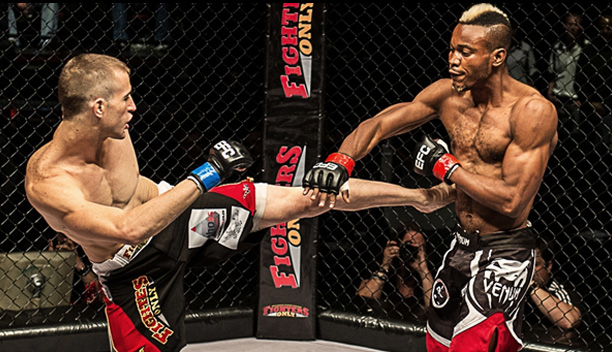 Kanyeba Anicet in action against Boyd Allen at EFC AFRICA 19

Kanyeba made his own debut at EFC AFRICA 19 where he faced the hugely experienced and deadly Boyd Allen. It was a trial by fire for the boxer who felt he was competitive on his feet but admits Allen’s ground game was too much for him.

“I am working towards becoming a complete MMA fighter,” says Anicet. “I know BB is a kickboxer but I will be looking to take the fight wherever it goes. I would like two or three fights, and then I want to face Boyd again.”

Nienaber is an SA Muay Thai champion with a Muay Thai record of 12-0. He has an amateur MMA record of 8-1 and will be making his pro debut at EFC AFRICA 20.

“My main aim is to put on a good fight,” he says, “and to win. I’m looking to finish in whatever way possible. Anicet is a boxing champion which suits me fine. I’m here to fight.”