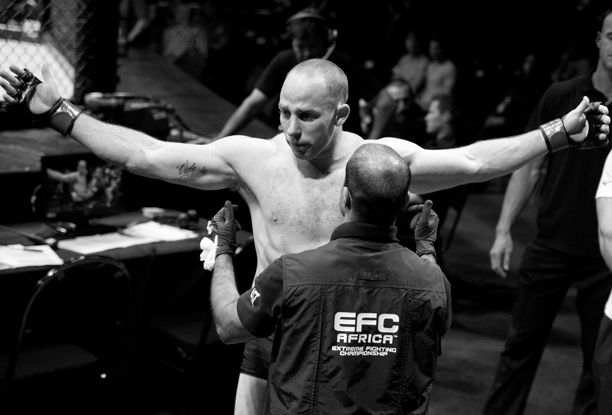 Garreth has a fearsome reputation. Does he intimidate you in any way?
No. I get nervous for all fights about the same.

What is your estimation of Soldierboy as a fighter? Where do you see his main strengths and weaknesses?
He’s dangerous because he has an “all round game”. His stand-up is good, so is his clinch and ground. My game plan is “to just to beat him” – there isn’t much you can poke holes at.

Garreth says he is in the best shape of his life, a new and improved version of the Soldierboy. What are your thoughts on facing the toughest version of him to date?
I’m happy he says this; it means I’m fighting him in his prime. I would hate to fight someone who is not at their physical peak.

What do you think happened in Garreth’s fight with Jeremy Smith. Why did he lose?
Garreth lost because Jeremy’s game plan was better. Jeremy stayed tight and looked for mistakes to capitalize on while never exposing any weaknesses. I think Garreth made a small error which resulted in the submission but I was informed Jeremy was up on points from beginning to end.

What do you think went wrong in your second fight with Jeremy Smith?
Fitness was the problem. I took the fight a bit lax because the first time we faced off I wasn’t in any danger for 95% of the fight. The second time we faced each other I’d had only one fight in about two years so I wasn’t ready to face a champion. He tired me out in the clinch and the rest was text book.

Did you feel like you’d lost momentum between Jeremy and your DQ with Tumelo Maphutha?
Yes, after JS I basically didn’t fight in nearly two years, not by choice. Going in with Tumelo was always going to be hard because he was and is hungry. In the first round I GnP’d him for most of the time, round two was the same but by round three he was still motivated and fit as a horse. That was actually the first time I went to the third in my life. It was a wake-up call as he had my number in that last round. Without the DQ I would have won on points but with the time left on the clock it would have been hard not to get KO’d.

What did your win over Donavin Hawkey mean to you?
It was huge. DH was a heavyweight champ for a long time. He is a pure killer and just an all-round scary guy to face. I think his corner was to blame for that fight (just my opinion). At one point he got me in a clinch controlled lower back position, he should have dumped me and landed in mount (or at worst half guard on top). I think he didn’t because his guys had told him not to go to the ground.

Garreth has said that the difference between you and he is that he is a champion and you aren’t. What is your response?
Jeremy is the champion. No one else.

Do you have any words for Garreth?
Not really.

What can Garreth expect from you on the night?
The bad days, the old days, the trench wars.

What can fans expect from you on the night?
Blood, sweat, and by the gallon.