Cleland Turns Up The Heat

Johannesburg (South Africa) – Ground artist Liam Cleland faces the brutality of Garreth ‘Soldierboy’ McLellan at EFC AFRICA 20. At his recent ‘Journey to the Hexagon’ shoot Cleland turned the heat way up on this encounter, in both his interview and a short video calling Soldierboy out on many fronts.

“He’s totally overrated,” said Cleland in his interview. “He built his reputation on fighting low level guys, as soon as he faced someone with any real game [Jeremy Smith], he got submitted.” “There’s no way he can handle me on the ground,” he added, “Gareth just doesn’t have the skill.”

“He grows the beard to cover the glass jaw,” he said in a tweet. “Wade Henderson proved it.” 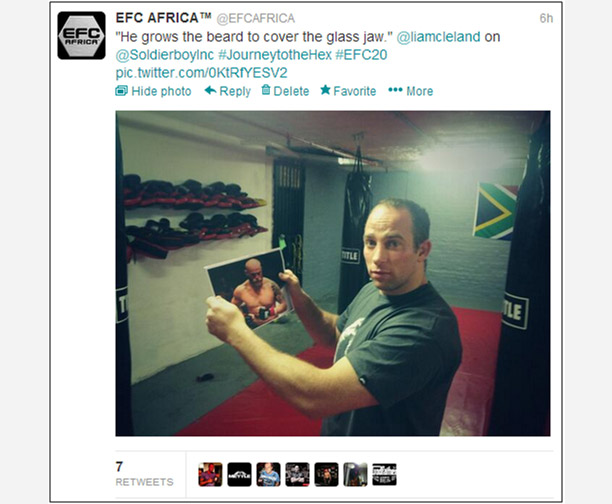 Soldierboy is known for his frightening explosiveness and high level, all round game. Cleland has built himself a comprehensive ground reputation having beaten every big name soundly in grappling competitions and with his recent, brutal elbow GnP win over Donnavin Hawkey has shown a frightening streak of his own. No doubt, the heat on June 27 is rising.