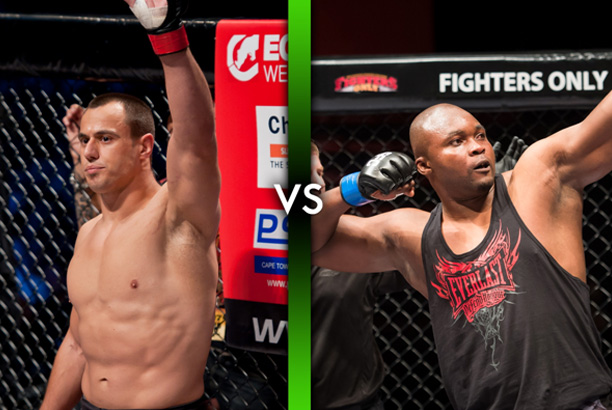 This bout has all the makings of an epic counter. Potts, one of the most dominant athletes on the continent, lost his title to Andrew van Zyl at EFC AFRICA 18. It was the second meeting between the two and a five round war at an intensity rarely seen, even on Africa’s greatest MMA stage. After the bout Potts confirmed his desire for a third meeting with Van Zyl, the only man ever to beat him in over five years of competition. Potts is determined to reclaim his throne and more importantly settle the score, but ‘Apocalypse’ stands in his way.

Misholas is an extreme striker with a reputation for knocking his opponents out. He defeated Paul Kietzmann by second round KO at EFC AFRICA 12 and did the same to Wilhelm Strauss, this time in the first, at EFC AFRICA 16. But for a shock loss at EFC AFRICA 13, where Egyptian boxer Mahmoud Hassan caught the big man with a freight train hook Misholas would already have had his title shot.

At EFC AFRICA 18 Misholas faced up and coming kick boxer Sors Grobbelaar and, to the shock of many, lost a three round, bloody and frenzied war to a split decision. Once again Misholas is building his title challenge from scratch and is chomping at the bit to prove his worth against a fighter of Potts’ caliber.