The Gun Strikes Back

“Who is Frederich Naumann?” 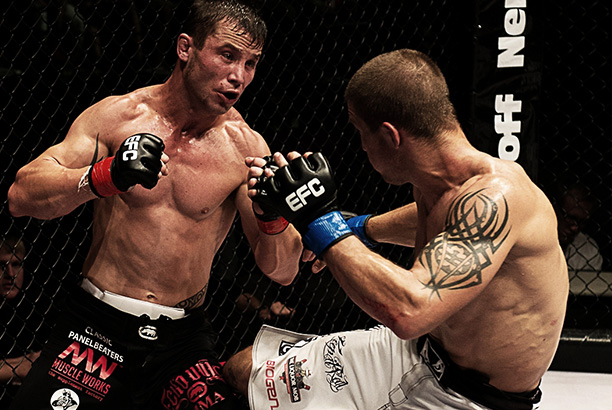 Johannesburg (South Africa) – Last week Frederich ‘Ninja’ Naumann questioned whether Johan ‘The Gun’ van Staden would have the skill and discipline to match him in their lightweight bout at EFC AFRICA 20. Today Van Staden responds, giving the Ninja no respect at all.

Naumann has said he doubts you’ll be able to focus hard enough for this fight, that your conditioning probably won’t be up to scratch. What is your response to that?
Frederich who?

Naumann has also said that he respects your strength and toughness, but doesn’t think you have the skills on the ground to match him. What is your response?
Does he fight at EFC?

In a stand up exchange Naumann has said you wouldn’t be able to stand with him. Thoughts?
Let him stand and let’s see how it goes. I need a K.O and it’s coming.

What is there about you as an athlete that EFC AFRICA fans have yet to see? What do you still want to bring to the Hexagon?
I am still in the process of getting into my rhythm. Then the fans will see why they call me ‘The Gun’. I always come to fight and to put on a show. I went the distance with a former EFC Africa champ on four days’ notice and I went the distance with the number one contender. It was great to be thrown in the deep end and still be standing at the end of three rounds.

Take us through what went wrong in your fight with Leon.
Leon is a seasoned fighter and the LW number one contender. It was only my second fight at EFC. My time will come.

Where you robbed in the Jakobi decision?
I would never say that. The judge’s decision is final and I respect that. It was a tough, hard battle and I enjoyed every minute of it. I also felt I had the upper hand in the stand up.

Should Naumann get a shot at the belt this year? He claims that a win over you secures it.
Like I said before, who is he?

What is your opinion of Naumann as a fighter? Where do his strengths and weaknesses lie?
I still don’t know who he is but I’ll tell you this off the top; his weakness is his big mouth.

What do you need to do to beat him?
Pitch up.

Do you have any words for him?
Who are you?

What can fans expect from you on June 27?
I have a lot of respect for all the fans of the sport and come 27th June ‘The Gun’ will come out blazing.