Could Alain Ilunga go all the way? 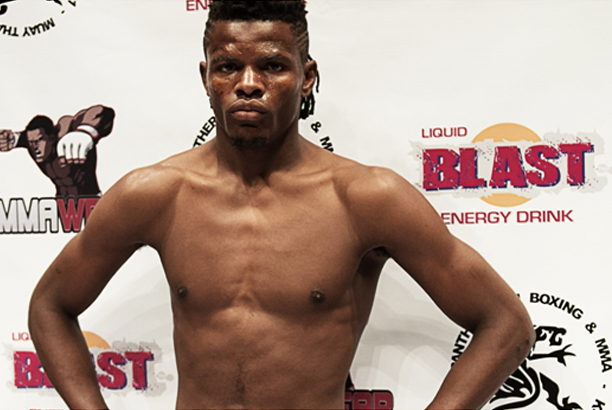 Johannesburg (South Africa) – DRC national Alain ‘Commander’ Ilunga wants a title shot. He has faced the best in EFC AFRICA’s featherweight division and now goes up against a final hurdle before likely qualifying to challenge for the title. At EFC AFRICA 20 Ilunga will battle EFC AFRICA 19’s Fight of the Night winner Markus Taljaard.

Ilunga is currently 3-1 in the EFC AFRICA organization. He’s beaten Koba Iakobidze, Ashley Culvert and most recently Wesley Hawkey. His only loss has been against Boyd Allen, whom he pushed hard into the second round while carrying a debilitating shoulder injury.

“Both Alain and Markus are huge, tough competitors,” says EFC AFRICA president Cairo Howarth. “Either athlete has staked a solid claim for a potential title shot. I can’t wait to see what both these guys will bring on the night.”

Ilunga annihilated Iakobidze with a gut wrenching body kick at EFC AFRICA 14 to earn a second round verbal submission. He pushed the fantastically talented Boyd Allen for two rounds at EFC AFRICA 15 and destroyed Ashley Culvert with a single liver kick at EFC AFRICA 17. All were shocked when, against Wesley Hawkey at EFC AFRICA 19, Ilunga took the victory in the first round by way of guillotine choke.

“That fight went just as we planned it,” says Ilunga’s coach, Anthony Kettle. “Our opinion was that we were going to beat Wesley in the standup and that he knew that. We expected him to shoot and knew there’d be a good chance for a guillotine. It went our way on the night.” “Markus is a tough competitor,” he adds. “However we still feel we have the standup edge. With all the rehab Alain has done on his shoulder, the amount of time he has had to stay off it, he’s developed his legs into huge weapons. It was the knee that turned the tide for us against Wesley and of course the liver kicks that got us the wins against Iakobidze and Culvert.”

Ilunga has been patiently campaigning since June of 2012. He’s a fighter that always puts in a massive showing, whether delivering a blistering win or a three round war against the division’s best. With patience and tough as nails performances he’s positioned himself as a man for others to beat.