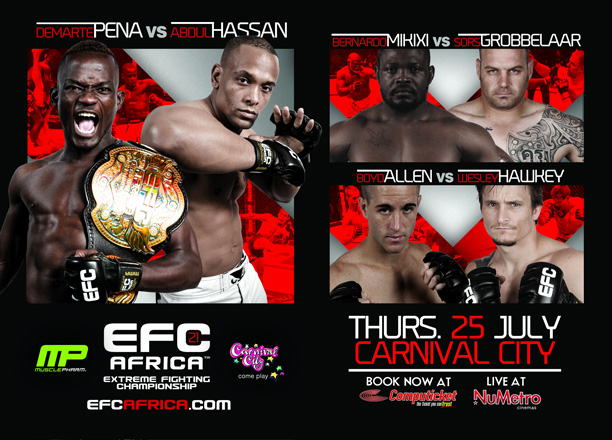 Johannesburg (South Africa) – Four colossal clashes featuring some of the biggest stars in African MMA are confirmed for EFC AFRICA 21, presented by MusclePharm, at Carnival City on 25 July.

Undefeated featherweight champion Demarte ‘The Wolf’ Pena will be challenged by Abdul ‘Hollywood’ Hassan, his toughest opponent yet. Hassan is a master of the ground, a consummate striker and a perfect strategist. A veteran and a member of the first wave of African mixed martial artists his game is without holes, a complete challenger in the mold of the champion himself. At EFC AFRICA 21 two athletes at their prime face near mirror versions of themselves for the champion’s belt, only sheer determination will separate them.

Sors ‘Guru’ Grobbelaar, a striking colossus and a kickboxing king on a winning tear stands toe to toe with Bernardo ‘The Black Panther’ Mikixi, the Angolan wrecking machine who has never entered into the third round. When these two collide there will be no hesitation and no thought of a points victory. They are fighting for the heavyweight number one contender spot and both will move mountains to achieve their goal. Expect an earthquake as these giants go to war.