JP Joubert Out For Indefinite Period, Interim Title On 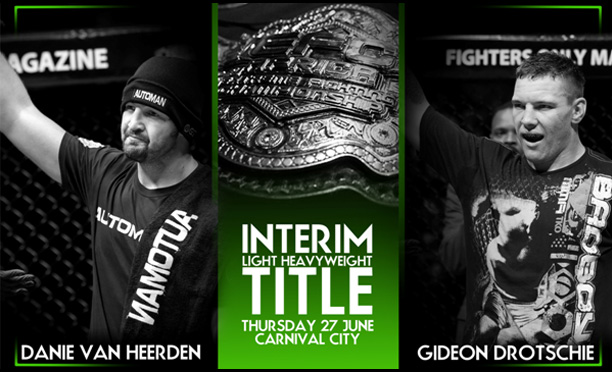 Johannesburg (South Africa) – It has been confirmed that light heavyweight champion JP Joubert will be out of action for an indefinite period due to injuries sustained in a motorcycle accident weeks ago.

“Although JP is healing well the nature of his injuries are that it’s impossible at this point for him to know when he will be able to return to the Hexagon,” said EFC AFRICA matchmaker Graeme Cartmell. “Both Danie and Gideon deserve to be challenging for the title, both are hungry and tearing up the ranks. This is the perfect matchup.”

The dynamics of an interim belt are that whoever wins at EFC AFRICA 20 will be the interim light heavyweight champion and will defend the belt as any champion would. When Joubert returns to competition he will then go head-to-head with the current interim champion.

“I’m feeling awesome!” Said Drotschie when told about the news. “I’m ready for it. This is my dream and it’s all I’m thinking about. I knew that I was fighting for the right to face JP so this is just one step closer.”

“This is a massive opportunity,” says Van Heerden. “A big surprise too. I was expecting to hopefully fight JP for the belt in November, but now… Training for five rounds starts today!”