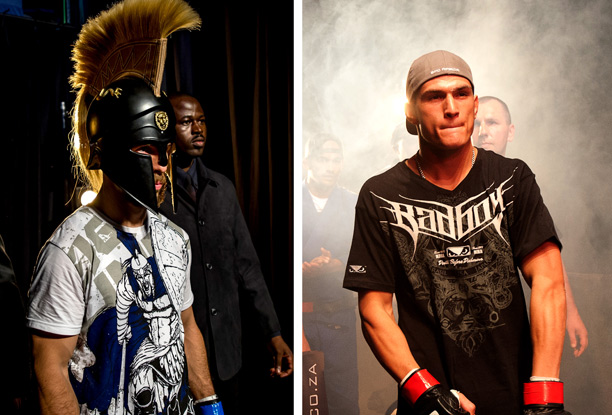 Ioannou is an athlete that has built a near dynasty with his emphatic performances in the Hexagon. Bursting onto the EFC AFRICA stage in May 2010 he immediately set about setting a new benchmark in all-round ability. He devastated Brendan Katz with a massive striking display and followed it with a consummate floor demolition of Will Bentley. In his very next bout, at EFC AFRICA 08, he challenged then champion Wentzel Nel for the title. Inside the first round the young Greek athlete caught his senior in a triangle and took the title. Ioannou has continued seeing off the best in the division, successfully defending his title three times in dominant displays of MMA brilliance, sporting a pro MMA record of 6-0.

In building his champion’s legacy he has done something more than simply rack up wins; he has ignited and united South Africa’s Greek community in a way not often seen before. To his fans he is a symbol of a proud people, in his battles he displays a hero’s spirit.

“When he walks out in that Spartan helmet,” says Nick Themistocleous, personal friend and committed fan, “it takes all of us back. He’s king Leonidas, it’s the small army taking on the big army, it’s all the legends and stories that we grew up with.” “When he fights it feels like we’re all fighting with him,” he adds. “It’s like we’re in the hex with him. People put aside their differences. People who haven’t spoken for years suddenly have something to talk about. We Greeks don’t have many successful pro sportsmen in South Africa. Costa is a huge hero. We’re all behind him.”

At the age of 17 Don Madge wrote his final matric exam early in order to get onto a plane to Thailand. He left African shores as the South African Muay Thai champion, a boy beating men for the title, and two years later challenged for the world Muay Thai title. He was beaten, in his own words out of his depth, but one year later fought the same fighter, again for the world title, and this time lost to a decision and one single point. Madge is a prodigy. He fights with a skill regarded globally as extraordinary; he is a wonder kid and a combat machine.

Today, at the age of 22, he has fought in over 100 top level Muay Thai and MMA bouts and has lost only three times. He has fought in stadiums packed to capacity in foreign lands, winning major titles, and has had numerous offers to join international MMA organisations. He is known world-wide for his dazzling stand-up and clinch technique while the extraordinary growth in his wrestling and BJJ skills continues to feed the rumour mill. In just under two years of BJJ training Madge has earned his purple belt. He has been billed as ‘the future of the lightweight division’ and on June 27 seeks to prove it. He has vowed to take the title from Ioannou.

“I’m not intimidated by Costa’s fan base,” says Madge. “Walking out into a stadium chanting his name means nothing to me at all. I’ve been in stadiums much bigger, much louder. Nothing he does intimidates me. I have my own followers. I’m motivated by his fans, the people that say I don’t have a chance. Every negative comment makes me work harder. The belt’s coming to Cape Town and there’s nothing anyone can do about it.”

“We Greeks follow him because he’s Costa,” says Themistocleous, “he’s our warrior. Madge won’t take the title. He just doesn’t have the skill.”

On June 27 two worlds collide. One man walks away with the belt.