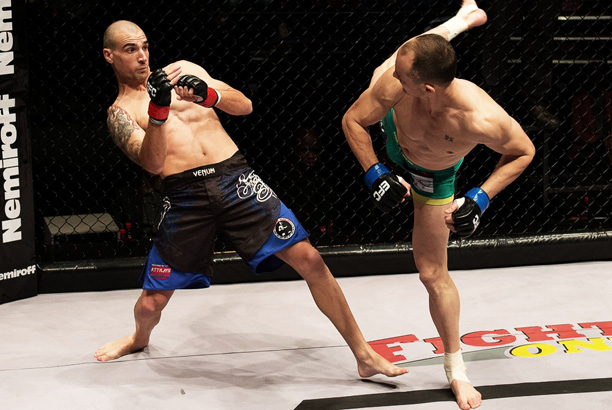 Johannesburg (South Africa) – Up and coming, hugely dynamic all round MMA fighter Frederich ‘Ninja’ Naumann will face gritty, powerful striker Johan ‘The Gun’ van Staden in a highly anticipated lightweight bout at EFC AFRICA 20. Winner of submission of the night with a startling, modified keylock at EFC AFRICA 19 Naumann is on fire, and focused on moving up.

“I start my fight camp next week,” said Naumann in a telephone interview given today. “I won’t be doing things too differently to the past. I believe my skills are there and they need to be maintained for now. Where I need to improve is on my mental strength. I will be working with a mental coach for this fight.”

“The main threat that Johan [van Staden] brings,” he says, “is he is incredibly tough. He’s very strong and he can take a punch. I’d like to build up my strength to be able to match him a little bit better. At the moment I’m walking around at about 73kg and cutting to 70, for this fight I’d like to try to get myself up to around 80.”

“My advantage is my speed,” he continues. “I also believe I have far more developed skills than he does on the ground. If you look at his fight with Dallas [Jakobi] it was mainly his strength and toughness that got him through there.” “Johan is very dangerous at the moment,” he adds. “If he loses again he’ll really be looking at a difficult situation. I expect him to be very motivated.”

Hailing from Polokwane but having spent his teenage years in Johannesburg Naumann credits his highly developed skill set to close on ten years of kickboxing, before taking up MMA, and the guidance of his ground couch, Jan Roets, a man boasting a stable of 12 SA champion wrestlers.

“I spend about 70% of my time on the ground,” says Naumann. “What I think I’m lacking, being in a small town, is high level sparring partners. I’m organizing to come through to Joburg to spar twice a month in future. I’ll be working with guys like Tyron Rightford, Juan Lubbe, Charlie Weyer and others.”

“Johan’s big problem is his conditioning,” he finishes, “which is definitely not a problem for me. I hear the guy parties and he’s not always as focused as he should be. I don’t drink or smoke and I train six days a week. I promise you now, even though his conditioning might not be there, this fight won’t go the distance.”