The Return Of The Machine

Neil Diesel to re-enter the Hexagon 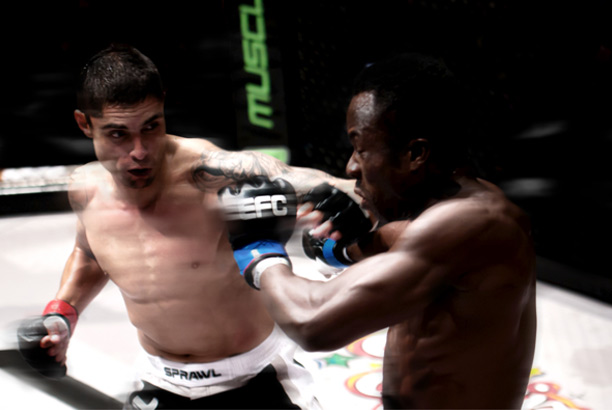 Johannesburg (South Africa) – At EFC AFRICA 20 the legendary Neil ‘The Original’ Diesel is to return to the Hexagon in a highly anticipated welterweight matchup with skilled striker Juan ‘Legacy’ Lubbe, himself fresh off of a win over David van Schalkwyk at EFC AFRICA 18.

Diesel is an African MMA legend, fighting and besting big name international opponents when the majority of today’s EFC AFRICA roster were just discovering the existence of the sport. He last entered the Hexagon against Victor Anyaogu at EFC AFRICA 08, just shy of two years ago, where his bout was stopped due to a knee injury to Diesel, later revealing itself to be a full dislocation.

“I’ve been taking time off since then,” says Diesel in an interview conducted this morning. “I’m not the kind of guy to be going crazy on Facebook and Twitter, not like some of these other clowns. I’ve been keeping a low profile.”

In the time since his last appearance Diesel has continued training but instead of competition concentrated on coaching and assistance. Injuries have played their part in keeping him from an EFC AFRICA appearance, forcing him to withdraw from a fight against Dino Bagattin while a matchup with Jadyson Costa was cancelled separately. On one occasion Diesel suffered broken ribs while acting as the sparring partner to IBO super middleweight title holder Thomas ‘Tommy Gun’ Oosthuizen. “We were sparring a little too hard,” says Diesel of the incident. “He caught me with a shovel hook, and that was that.”

Diesel’s return to the Hexagon has come off of the realization that he’s not finished with the sport of MMA. “I’ve never been dominated in a fight,” he says. “I’ve never lost a round, I’ve never felt that any of these younger guys has thrown me around, made me feel like I don’t belong anymore. I guess until that happens, I’m going to still be here.” “I’m hungry,” he continues. “It’s been a good break and now I’m back. I’m happy to fight here at welterweight or even to move down to light. I’m sure he [Lubbe] is going to prepare hard, but I don’t know if he’ll be ready for what’s coming.”

Diesel is currently coached by Rodney King. His fight on June 27 will be taking place on the day of his daughter, Demi’s, birthday, prompting to him to dedicate his coming fight to her.