“I Will Not Let This Go To A Decision” 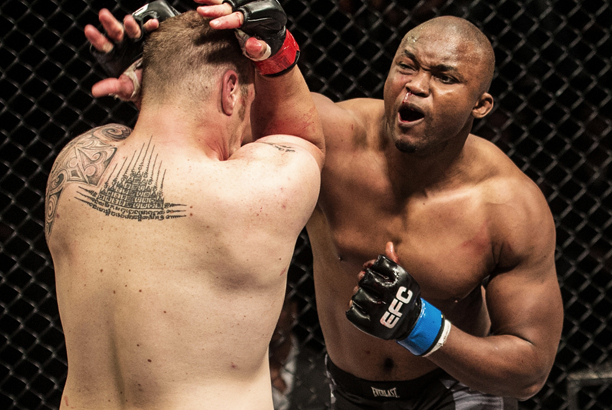 Ricky Misholas in action against Sors Grobbelaar at EFC AFRICA 20

Johannesburg (South Africa) – Ricky ‘The Apocalypse’ Misholas and former heavyweight champion Ruan ‘Fangzz’ Potts are on a freight train collision course and neither are in the mood for patience.

“No one is born a champ,” says Misholas of his opponent. “You have to become one. Ruan and I are going up the same ladder. Who he was means nothing to me, only what happens in the ring.”

Yesterday Potts was questioned on the power of Misholas’ punches and whether he intended to defend by taking the action to the ground. Potts dodged the question, saying instead that the fight will go where it goes. Misholas is of a similar opinion.

“Anything can happen,” he says. “Down or up, I don’t care. Any small mistake and I will be taking advantage.”

Potts stated that he has learned his lesson from his fight with Andrew van Zyl and will be finishing this fight early.

“I have also learned from my mistakes,” says Misholas in response, referring to his controversial decision loss to Sors Grobbelaar. “I will not let this go to a decision.”

“I don’t mind what he’s got,” says Misholas finally. “I want Ruan to come out and do his job. This will be a fight to remember. It will be hard it and it will be messy. Ruan and I will meet on June 27, I will do my talking then.”