“Don Doesn’t Have The Power To Knock Him Out”

Mynhardt on Ioannou vs. Madge 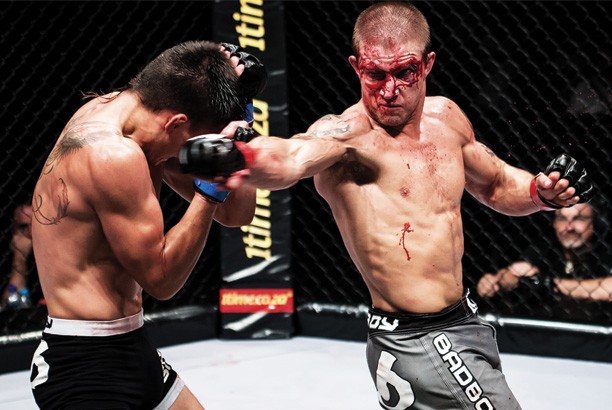 Johannesburg (South Africa) – Costa Ioannou vs. Don ‘Magic Man’ Madge at EFC AFRICA 20 is the most anticipated fight in EFC AFRICA history. Social media is boiling over on the chances the challenger has of besting the champ. Leon ‘The Iron Lion’ Mynhardt has fought both and knows better than any man on the planet what it will take for Madge to win. We got his thoughts in an interview:

How do you see this fight going?
I reckon Costa wins by submission.

Who is mentally tougher here, Don or Costa?
Both of them are on top of their game. Costa has to bring his A game because Don clearly wants that strap and will be on top form I think.

What sort of a threat do you think Don poses to Costa?
Lethal elbows, knee strikes and kicks of course. Don has been a Muay Thai fighter for a long time.

How do you imagine Don would be preparing for this fight, you having been through the same experience?
I think Don will be working more on his wrestling skills and will try to keep the fight standing. Or he will have had to gain an extreme amount of skills on the ground in quite a short period, you feel me…

In your opinion, what does Don need to do to be successful here?
Don will have to try and keep the fight standing and knock the living daylights out of Costa because he doesn’t have enough power to knock Costa out. If the fight stays on the feet I see Don winning by decision, but I don’t think it will.

Where do you think Madge will be underestimating Costa?
Maybe in the standing part, but then again Costa trains with other guys that can also strike… There’s no use in underestimating him.

You have changed into a formidable grappler from a devastating striker. What would you have done differently against Costa?
Thanks for mentioning that. Um… I’m coming for that lightweight strap, so I won’t tell you.

How did Costa surprise you in the fight?
He didn’t. Basically he only out grappled me. I’ve made sure to learn from those mistakes.

Costa’s Army, did they influence you?
Not at all, one must be able to compete without the support of a crowd because if you have to go and compete abroad, where all those supporters aren’t there, you have to be just as good… or even be able to win the crowds support.

Do they give Costa a boost or upper hand mentally?
I think yes. They give him a little bit of a boost, but not the upper hand. Any other competitor can be mentally just as strong or even stronger on the night, regardless of whether the crowd is on his side or not.

Would he have been as powerful had he not received so much support from Costa’s Army?
Costa has never fought without his crowd, so that’s impossible to say.

Who had the fight on points between you and Don?
Let’s see, I’d say first round went to him, second round was a draw and third Don gave up pretty much.

If Costa loses will it make the division more exciting, especially for you?
No. EFC AFRICA is already exciting enough as it is, and I need another shot at the title, so win or lose Costa my friend we will meet again.

Who else should be considered a threat to Costa’s undefeated reign?
The IRON LION! Watch out. My time is now…