“Donavin, I Dare You, Keep It Standing” 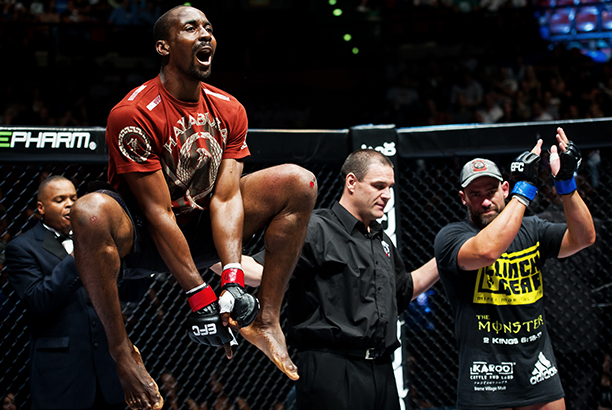 Ahana celebrates his win over Sean Robinson at EFC AFRICA 12

Johannesburg (South Africa) – Raymond ‘Raymonchoo’ Ahana, the Nigerian kickboxing superstar, touched down in South Africa yesterday ahead of his bout with Donavin ‘Bam Bamz’ Hawkey at EFC AFRICA 20. The three time Nigerian Kickboxing champion sat down for an interview on his thoughts on Hawkey, training and competing from Nigeria, and what fans can expect on fight night.

You’re considered one of the toughest guys in African MMA. Hawkey has not gone further than the first round. Where do you rate Hawkey in contrast to your toughness? Do you think you’ll be able to wear him down?
Thank you, I appreciate the compliment. I rate Hawkey as a professional athlete in a class of his own and I’m looking forward to going up against him. My toughness is an added advantage. But from simple psychology, since my toughness counts for me, I should be able to wear him down.

What are your thoughts on Hawkey’s ability to take punishment? Do you think Hawkey has the heart to pace you?
Hawkey is a former champion. He has the heart alright, if not he wouldn’t accept the fight.

How important is it to you to fight for your country?
Very. As an ambassador I get to promote and contribute to the development of my sport in my country. This is a great honour.

How much support do you receive from your country?
I don’t get any support from my country. Everything I’m doing is by God’s grace and my family.

Do you hope to inspire other Nigerian athletes to follow in your footsteps?
Sure. It’s my goal to spread my sport amongst the youth of Nigeria. I need to be a good role model, I want to see current terrible happenings such as drug taking, crime and rape disappear. I know that MMA can help with this.

You recently posted a picture of you working a bag in Lagos. The facilities looked rundown compared to what is available in South Africa. What are the challenges you and other Nigerian athletes face in getting good training?
That picture was the result of heavy rainfall. Because of it our main gym was not open forcing me to train in an open room. The facilities in Nigeria are not as good as what can be found in South Africa but we don’t see that as a setback. We are motivated to keep going and work hard. The challenges I and my fellow athletes in Nigeria face are enormous. From up to date equipment to training tours abroad, medical facilities, etc. We see these obstacles as things to overcome. We believe that where there is a will, there is a way. 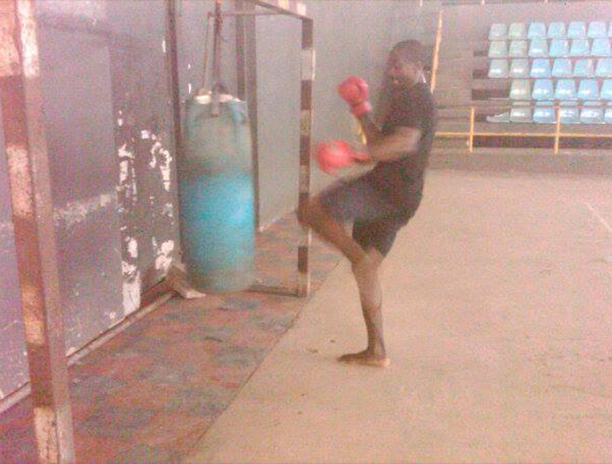 Ahana works a bag in an open room after heavy rains forced the closing of his gym.

Do you think Donavin’s superior facilities give him an advantage in this fight?
Donavin has what he needs and deserves. His advantages do not worry me. I live by my motto: One mind, one spirit.

Donavin is known to close the gap to clinch and throw hooks while you are great at distance. Is your reach going to be an advantage? Will you be able to keep him away?
Donavin has his style, I have mine. When we’re in the Hexagon watch out for the ‘Choo’, Dragon style! It’s not all about grappling and the clinch.

You’ve fought at heavy and light heavyweight. Now you’re making the cut down to middleweight. Do you think this is going to be the ideal division for you?
Yes. I normally walk around at 90kg, cutting down to 83kg is not a problem.

How do you see this fight going?
This fight will be tough. I’m ready for three rounds of war.

Where could you lose this fight?
I don’t see myself losing this fight.

In terms of your overall career at EFC AFRICA, where would you still like to go, and how will you get there?
My ultimate goal is to fight at the highest level of MMA. I will get there by God’s grace and hard work.

Is there anything else you’d like to say?
Donavin is a former champion. He has shown that he among the best. I want to say to him that I dare him to stand with me. I know the issue is the ground and whether it goes there and I am happy to go there. I have only been training Judo and Wrestling. But I say this, the fight will be light, it will be interesting, it will be fast, it will be fight of the night if it can stay standing. Donavin, let us stand. I say it again. I dare you to stand with me. I would like to thank God, EFC AFRICA, my team mates, manager, coaches, my sponsors and most of all my loving supporters and hardcore fans. I most sincerely and frankly appreciate you all and will continue to be a good role model. One love. Peace!