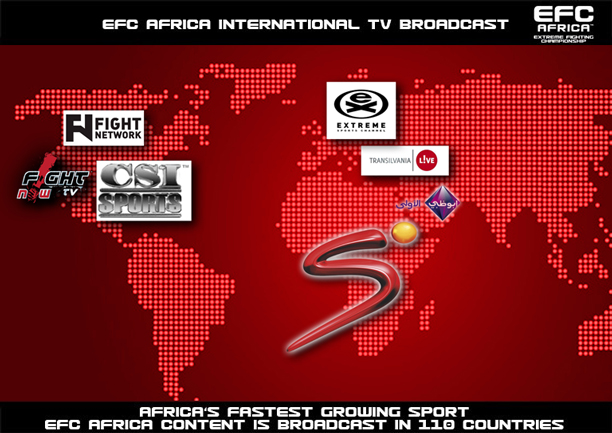 Johannesburg (South Africa) – EFC AFRICA has signed a landmark two year broadcasting deal with Abu Dhabi TV. The deal will see its 2013 and 2014 events broadcast live, in HD, across the Middle East and into Arabic speaking North African countries.

Abu Dhabi TV is based in the United Arab Emirates (UAE) and is managed by the region’s largest media company; Abu Dhabi Media. The network has recently launched an MMA fight block on its Abu Dhabi Sports channels and has secured the rights for the three hour live broadcast of EFC AFRICA events.

The new deal will see all of North Africa being covered meaning EFC AFRICA events, starting with EFC AFRICA 20, will go live across the entire African continent. Countries like Egypt, for example, where multiple EFC AFRICA fighters are based, will now be able to watch the live broadcast.

“This is a fantastic partnership for both EFC AFRICA and Abu Dhabi TV,” says Jonathan Ford, executive vice president of CONTENT TELEVISION. “We will now be bringing Africa’s ultimate fight sports promotion to millions of new viewers live and in HD”

Cairo Howarth, EFC AFRICA president, added, “MMA is hugely popular in the Middle East so we are very pleased that we have found an ideal partner in Abu Dhabi TV. We look forward to introducing our athletes and our premium fights to scores of new fans.”

Additional support programming such as Africa’s Greatest Warriors and Journey To The Hexagon will also be flighted leading up to each live event, introducing EFC AFRICA stars to a new and exciting market and building hype for the main card bouts.