Both parties agree to 86kg 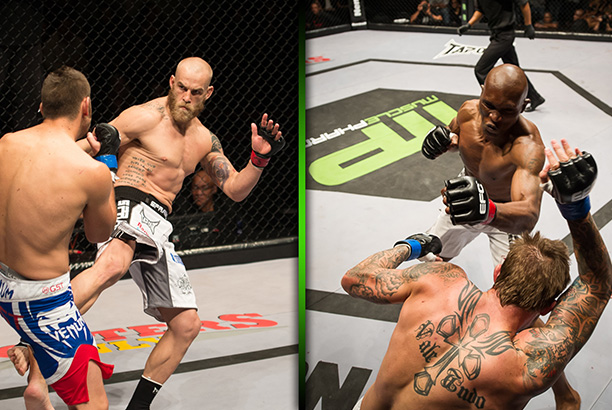 Johannesburg (South Africa) – The battle between Garreth ‘Soldierboy’ McLellan and KO King Tumelo Maphutha at tomorrow’s EFC AFRICA 20 event will take place at catch-weight, this as a result of Maphutha’s taking the fight on extremely short notice.

On Thursday last week the news broke that Liam Cleland, originally slated to face Soldierboy, had to withdraw from the fight due to a grade two groin tear sustained in training. Maphutha immediately stepped up to the plate but of course was far from the ideal weight spread to cut down for a middleweight fight.

“I was at 93kg when I got the call,” says Maphutha. “We knew it would be a challenge to get myself down to the 84kg middleweight limit.”

Negotiations were undertaken with McLellan’s camp, who agreed to take the fight at catch-weight on the 86kg mark.

“I’ve got everything to lose in this fight by taking on a heavier Tumelo,” says McLellan, “and he’s got everything to gain. I’ve said before that I respect Tumelo for stepping in, it takes a warrior to do that on short notice. We feel 86kg will be a fair weight for us both to hit, even though I’ll still be sacrificing size on the night.”

Maphutha is a large middleweight who is very comfortable fighting at light heavy. He will no doubt be dropping the four or so kilos he needs to at this stage in water, which he will put back on with ease by the following day. The likelihood is that McLellan will enter the Hexagon at around 87 or 88kg, while Maphutha could easily be back into the 90’s.

For Soldierboy it makes a fight in which the stakes are high, and in which he will be doing everything to ensure he takes the win.

“I’m happy everything’s sorted out,” says Soldierboy. “I’m ready to get it on. Let’s do it.”