Welcome To The Magic Man Era 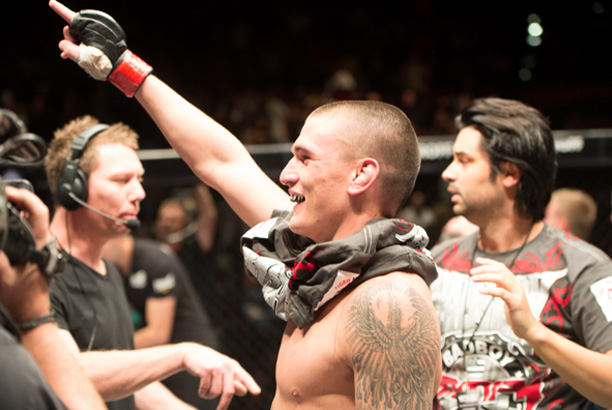 The matchup between Ioannou and Madge was the most anticipated in African MMA history. Intense smack talk led up to the fight, with the champion intimating that Madge was not ready to face him. The bout delivered a different verdict. Admittedly unable to defend Ioannou’s takedowns, Madge challenged the champion’s famed ground game and beat him there. Over four rounds, Madge and Ioannou put on an incredible display of jiu-jitsu prowess, Madge slowly but surely taking the advantage and finally, in the fifth, submitting Ioannou with a rear naked choke.

Gideon Drotschie faced Danie van Heerden for the interim light heavyweight title, in a match where both seemed evenly matched. Drotschie took the fight to Van Heerden with stinging strikes, but soon changed his strategy in the face of Van Heerden’s looping power shots. On the ground, Drotschie dominated with a highly evolved arsenal, applying submission after submission as Van Heerden was slowly worn down. Drotschie put the final nail in Van Heerden’s coffin with a keylock in the third round.

The third main card matchup was between Garreth ‘Soldierboy’ McLellan and Tumelo Maphutha, a late replacement for an injured Liam Cleland, necessitating the bout to be fought at catchweight. Maphutha put on a terrifically powerful performance, hurting McLellan with massive punches, forcing Soldierboy to resort to the tactical approach of staying clear and ultimately winning through on points.

Former heavyweight champion Ruan Potts was scheduled to face Ricky Misholas as the night’s second main card bout but the fight had to be cancelled after Misholas pulled out with an injured hand. He was cleared to fight by medical staff but still declined to appear. Fans have been assured they can expect to see Ruan Potts in action at EFC AFRICA 21.

Alain Ilunga faced Markus Taljaard in the first main card bout of the evening. Ilunga immediately sent in powerful leg, body and head kicks, visibly hurting Taljaard, who refused to give in. Taljaard could not hold out for long, however, and 2:42 into the second succumbed to a triangle from Ilunga. Ilunga has now cemented himself as the number one threat in the featherweight division and will be watching champion Demarte Pena’s title defence against Abdul Hassan at EFC AFRICA 21 with interest.