Allen To Step Out Of Pena’s Shadow 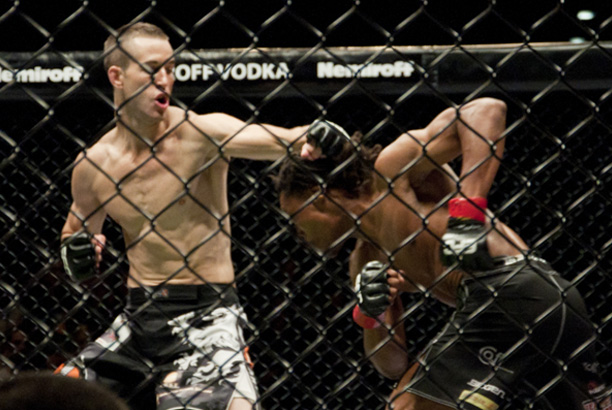 Johannesburg (South Africa) – Boyd Allen is undefeated in the Hexagon. More than that he has (arguably) never lost a round. He is a fighter that boasts an incredible skill set, but has he really been tested? At EFC AFRICA 21 he faces debutant wrestling based athlete Hanru Botha in what may be his biggest test yet, and the start of a new phase of his career.

Initially Allen was slated to face Wesley Hawkey as an EFC AFRICA 21 main card fight but Hawkey pulled off due to personal reasons. Pretoria’s Markus Taljaard was approached and agreed to step in. Last week the team CIT tough man went down with a knee injury, forcing him to withdraw.

Hawkey would have been Allen’s highest profile opponent, apart from Alain Ilunga, to date. Allen is the teammate of current and undefeated featherweight champion Demarte Pena. He and Pena have made it clear that they will not fight each other, forcing Allen into a gate keeper role. He is seen as the man to beat in order to solidify a featherweight title contender position while not being able to challenge for the title himself. With the withdrawal of Taljaard from the EFC AFRICA 21 card a new scenario presented itself for Allen, one that opens a host of possibilities.

Initially it was suggested that Allen face debutant Hanru Botha on the prelim card at featherweight. Allen countered with the proposal that he take on the new man at lightweight, an indication of Allen’s respect for the wrestler’s strength.

“Hanru Botha is an incredible athlete,” says EFC AFRICA president Cairo Howarth. “He has been the South African amateur wrestling champion numerous times as well as all Africa champion. Himself and his brother, Pierre, have absolutely dominated their division on the entire continent and since switching to MMA Hanru has annihilated opponents in seven appearances so far. With his wrestling base he may be the man to beat Allen.”

Allen vs. H. Botha marks potentially a new phase in Allen’s career. With both the lightweight and featherweight ranks open to him, Allen is in a very exciting position.