The Wolf looking to destroy 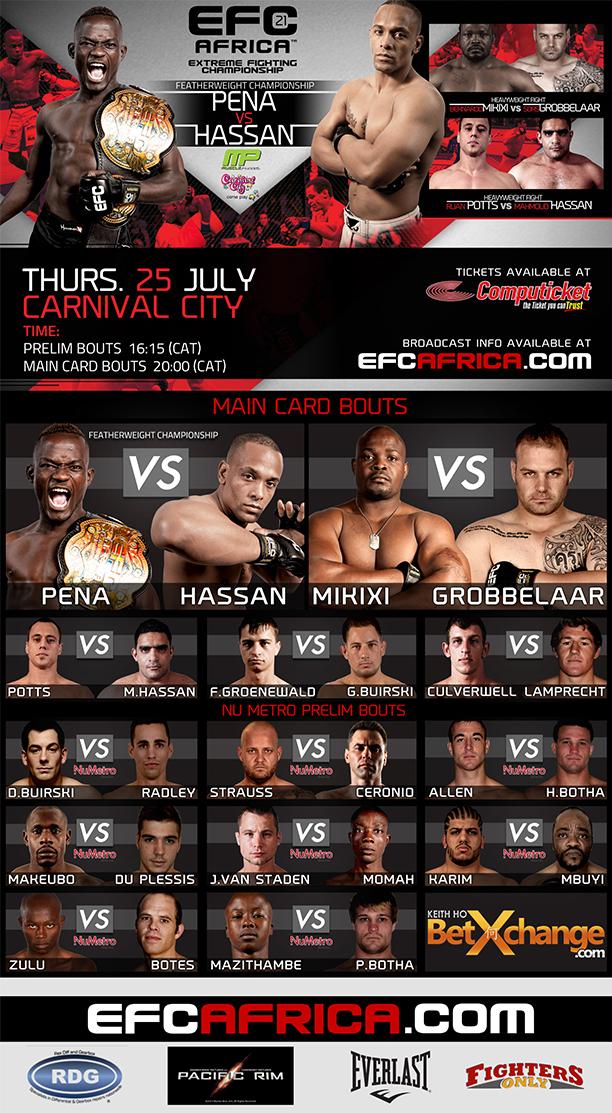 Over the past weeks Hassan has baited the champion relentlessly, referring to him as a dog that will be chained and disciplined, a puppy that will be trained, and a has been with neither the skill or experience to best him. For the most part Pena had made little comment, but last week lashed out with the solid promise that the more Hassan has to say, the more his fire to hurt the challenger is being fed. Currently, this matchup promises the darkest and most personal war Pena has fought in a fight that long ago became personal.

Sors ‘Guru’ Grobbelaar, a kickboxing king on a winning tear stands toe to toe with Bernardo ‘The Black Panther’ Mikixi, the Angolan wrecking machine who has never entered the third round. When these two collide there will be no hesitation and no thought of a points victory. They are fighting for the heavyweight number one contender spot and both will move mountains to achieve their goal. Expect an earthquake as these giants go to war.

Former heavyweight champion Ruan Potts, a man coming off the only defeat of his career in his loss to Andrew van Zyl at EFC AFRICA 18, begins his comeback trail. He faces Egypt’s Mahmoud ‘Hellboy’ Hassan, an athlete with some of the heaviest hands on the continent. Hellboy has made it plain that he relishes the chance to face the former champion and is looking to knock him out cold.

F. Groenewald vs. G. Buirski is a pivotal featherweight matchup. Both men are known for massive shots followed by brutal clinch and takedown work. Each is looking to make a definitive claim for title contention and in each other they find the perfect scalp.

On 25 July 26 of Africa’s greatest warriors stand toe to toe in the biggest and best MMA event on the continent. 13 massive bouts, one colossal night.