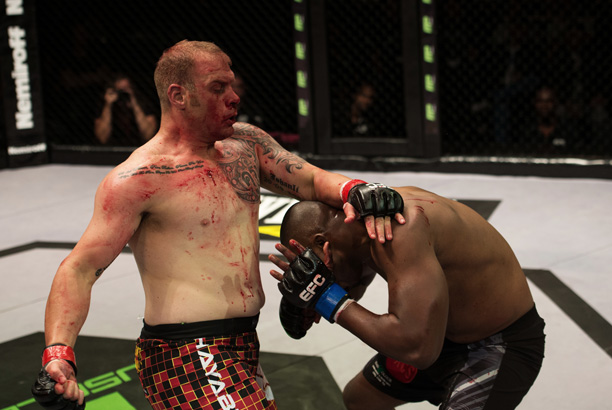 Johannesburg (South Africa) – Yesterday Bernardo ‘The Black Panther’ Mikixi sent out some hard words to Sors ‘Guru’ Grobbelaar, the man he will be facing for the number one heavyweight title contender spot at EFC AFRICA 21, July 25. Today the Guru responds with some words of his own.

“Bernardo is very strong and physical with a wealth of experience as a fighter,” says Grobbelaar. “I’m expecting a hard fight.”

“I’d like to fight Bernardo as he is one of the most feared fighters in Africa,” said Grobbelaar. “That’s how I test myself and measure up to the required standard to compete amongst the best on this continent.”

In his interview Mikixi commented that Grobbelaar had been training at his old gym in Cape Town, Panther Fighting Arts, and no doubt was receiving information on his fighting style there.

“I live in George,” replied Grobbelaar. “Panther’s in Cape Town, about 410km from me so to train there’s kind of impossible. I train and fight out of our own gym; Two Brothers Combat Institute in George. Whenever I go to Cape Town I do train at Panther and at another gym there, but I haven’t even been near Cape Town since our fight was signed.”

“On Bernardo’s comment that I like to talk a lot,” said Grobbelaar, “I think I’m probably one of the guys that says the least. I never called myself anything (Kickboxing King, Striking Colossus, World Champion, etc) other than Guru. All those other names are how I’ve been branded.”

“Bernardo’s underestimating me,” concludes Grobbelaar. “This fight’s going to be very physical. He says I need permission from him to face Van Zyl. I guess I’m going to get the permission.”