“It Was An Honour To Step Into The Hex With You” 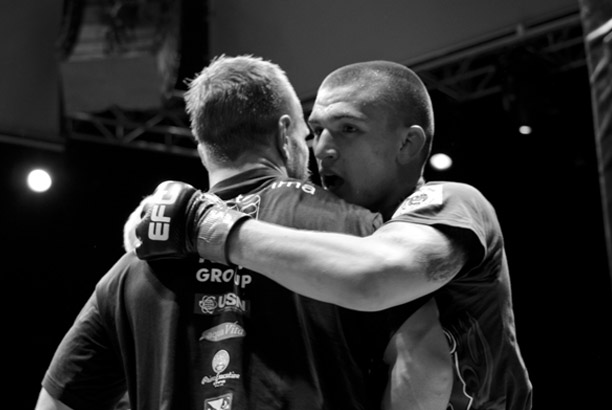 Johannesburg (South Africa) – On July 27 Don ‘Magic Man’ Madge did the seemingly impossible by beating previously undefeated Costa Ioannou at his own ground game and taking the EFC AFRICA lightweight crown. Today both fighter and coach answer in-depth questions about just how the fight went for them.

Both of you were able to keep quiet and held in the face of all the speculation that you wouldn’t be able to compete with Costa on the ground. Was there ever a moment where you began to doubt your ability and believe the comments put down by fans, particularly Costa’s?

Don: NEVER. I know how much work I put in and the level of coaching I receive; there was never a doubt in my mind. Fans are not the ones in the hexagon and in the gym.
Mike: No, we were always confident in Don’s abilities on the ground. We knew that Don could finish the fight on the ground, we prepared for a ground fight.

The first round seemed to be the beginning of a classic, wear him down, Costa fight with Don looking like he was in trouble. How did that round go for you?

Don: I had accepted the fact that the fight would hit the mat weeks before the start of round one. Obviously, I wanted to keep it standing as long as possible but you have to adapt to wherever the fight goes. I had been there a thousand times in training camp.
Mike: Costa won the first round. Don was on the bottom but wasn’t under any serious threat. We felt that even though Costa won the first round his body language made us confident that the fight was ours.

It seemed that Costa took the first, you the second, perhaps Costa the third, even though he was beginning to tire, and you the fourth. Would you agree?

Don: He definitely got the first round. I feel the third round could have gone my way, just because even though he was on top for a bit he couldn’t do any damage. When I was on top I was scoring continuously and ended the round on top in a dominant position. But I’m a finisher and I never want to leave it to the judges.
Mike: I think Costa definitely won the first but the third was pretty even. We felt that Don probably won it, the rest was obvious.

Was there a point where you began to feel that you had the fight in the bag?

Don: No. I know how fights work, it’s never over until it’s over. I maintained my focus and never let myself think I had the fight. Costa was champion for a reason and he’s always dangerous.
Mike: After the first round we were confident but knew for sure after the second when Costa could barely stand.

Did the fight go the way you expected it to go?

Don: Well, I expected to win, if that’s what you mean.
Mike: Yes and no. We planned to take the fight past the second round as we felt that Costa wouldn’t have the cardio to keep up with Don. I felt the fight would end with a KO on the feet but was more than happy with the submission.

After all the hype around Costa’s ability, when you finally began the fight, how different was reality to what you were expecting?

Don: He met all my expectations. He is an awesome athlete. You’re only as good as your last opponent and I feel like he forced me to bring out my A game.
Mike: It wasn’t too different. We knew that he had holes in his ground game that we would look to exploit. He did prove to have better takedowns than we expected though.

At the weigh-in Don seemed extremely drained. Talk us through how your weight cut went.

Don: I was sitting at 76kgs and everything was going to plan about two weeks before the fight. Then I got sick and my body broke down completely. I couldn’t train at all for the last two weeks, so naturally my weight shot up like crazy. I ended up having to cut a lot of weight in just three days, so that’s why I was completely drained. But, I’m a professional and this is what I do. I was taking that belt come hell or high water. No one ever fights at 100%. No point crying about it, just get on with the task at hand.
Mike: The weight cut was disrupted by a severe case of gastro. Don ended up cutting 12 kg in three days, so it was tough. Mentally Don stood up to the pressure and got through it with flying colours.

Costa brought a lot of pressure at the face off after your weigh-in. How did that affect you in your weakened state? Could you talk us through your thoughts and feelings then?

Don: Not at all. I knew he was going to get in my face, it’s his thing. I’m not one to allow people to force my emotions, it will never happen. I just thought to myself, “save your fire for the hexagon, a mean mug is not gonna help him there.”
Mike: Costa’s emotions never affected Don at all, it actually gave us confidence as we knew his anger would make him gas faster. Don still mentioned after the weigh-in that it felt like Costa was the challenger trying to make his presence felt.

Don rarely sat down between rounds (if at all), and seemed to gain energy as the fight wore on, particularly after the third. Did you feel tired at all? What sort of cardio did you do to achieve that level of fitness?

Don: I don’t like to sit between rounds so I didn’t. I train really hard to make sure my cardio is at 200% and that’s thanks to an awesome team who always keep me pushing myself. I never want to feel like I don’t have any gas left so I always keep my cardio level tops.
Mike: We never let Don sit in between rounds at training and it was always our plan to keep him standing in the fight. Charl [Malherbe], our resident strength and conditioning expert, had a lot to do with it. Those secrets we’ll keep close to our chest.

Don came out in the second round and suddenly dominated, stuffing Costa’s takedown then taking top position and landing GnP, something that perhaps had never happened to Costa before. Was that a moment you were conscious of? Getting the better of him?

Don: I can’t really say. I was just in the moment and adapting to the fight.
Mike: It was definitely a conscious moment, getting through Costa’s best round (rd1) and knowing that Don’s ground game could easily match Costa’s was a real boost.

Costa very nearly sunk two or three armbars. Did you feel like any of them were close?

Don: No, neither of them were close.
Mike: The armbars weren’t a threat at all. If they were Don would have come close to tapping but he escaped them with relative ease.

Considering all the talk that had gone on on social media, did this fight ever become personal to you? Did you feel that you wanted to set out to teach Costa and his camp a lesson in some way?

Don: No, like I said before, I usually laugh things off. At the end of the day, eventually, you’re going to have to stand opposite me, in a locked cage, in front of millions of people. There all the talk and hype can’t save you. I’m not a trash talker, I’m not a promoter, I’m a fighter!
Mike: I feel it became very personal for both camps. Comments from Costa like ripping Don’s hopes and dreams away, calling him arrogant and disrespectful, all fuelled us to shut him up.

What were your emotions when Costa tapped?

Don: Words could never describe the feeling. I was completely overwhelmed with emotion.
Mike: Words can’t describe it man, but definitely the proudest moment I have had as a coach.

It seemed that Don immediately ran to the cage wall and saluted his supporters. How important was their role in your victory?

Don: I’m truly humbled by the support I received. My loyal friends, family and fans who have been there since day one, they mean the absolute world to me. Hopefully I turned a few non-Madge supporters into fans, that’s all I could hope for.
Mike: The fan and family support gave Don extra motivation and almost made it feel like we were fighting in Cape Town.

How important was your team’s role?

Don: I could have never done this without my team! I owe it all to my coaches, training partners and my brother. They mean everything to me and I could never repay them for all the support and hours put in.
Mike: The team dynamic is unbelievable. Everybody added value to the camp and contributed to the win.

Don beat Costa at his own game, something very, very few people thought was possible. Did you set out to do that?

Don: That was never the plan but it just so happened that it went that way. I always had the confidence in my ground ability.
Mike: No the plan was to get him into the later rounds and then knock him out, the plan was always to finish. I told Don just before he went out that he knew what the game plan was but I told him to trust his instincts as a fighter. He knew after round one he could beat him on the ground and we backed him.

Now that the fight is over, do you have any words for Costa and his camp?

Don: Firstly, to Costa: Thank you for the opportunity. It was an honour to step into the hexagon with you, I have big shoes to fill. You’re an incredible athlete. I don’t have anything to say to his camp. I think they are a good bunch of guys but I do have something to say to only ONE of his team mates: The principal’s office is closed, sir.
Mike: No. We spoke after the fight. All was said on the night, in and out of the cage.

Don: I’m already back at training, got lots to work on, have to keep improving. I’m waiting for the next challenge so we’ll see what is in store for me down the road.
Mike: Planning for November’s title defense, back into the gym.

What did Costa say to you when you spoke just after the fight?

Don: That’s just between me and him.
Mike: I thanked him for the fight and wished him well. The usual hugs and man love that’s displayed after a good, clean, hard fight.

EFC AFRICA returns to Carnival City for EFC AFRICA 21, presented by MusclePharm on July 25. All 13 bouts can be seen live at Carnival City and at Nu Metro cinemas throughout South Africa. Tickets on sale now at www.computicket.com. Tickets for the live broadcast to Nu Metro Cinemas available soon at www.numetro.com.