Kruger In For The Fight Of His Life

Tumelo Maphutha will not be stopped 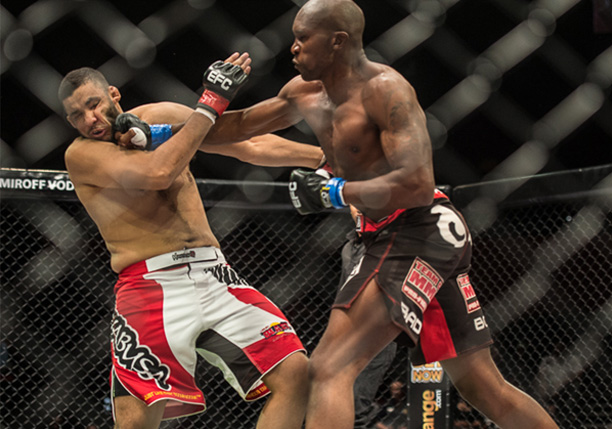 Johannesburg (South Africa) – In Tumelo Maphutha’s six Hexagon appearances he has only ever had the benefit of a full training camp once; against Liam Cleland. At EFC AFRICA 22, on August 15, Maphutha faces JP ‘Tinkerbell’ Kruger in the headline bout. Looking at his record it’s clear he is a fighter that is seemingly unfishable, that possesses vast potential, and is going to offer undefeated kickboxing champion Kruger the fight of his life.

“Maphutha is an incredible prospect,” says EFC AFRICA president Cairo Howarth. “What do you do to beat him? He’s near impossible to take down. Cleland had to pull guard on him to get him to the canvas and could not finish him. Fighting him is like fighting a slab of concrete that hits back, and hard. It is so exciting to watch him fight, his opponent is always a split second away from being knocked out.”

Maphutha first entered the Hexagon as a late replacement for Chett Meyer, a feared light heavyweight and veteran. In that encounter the debutant Maphutha took the top ranked veteran to the second round, not giving an inch before the bout hit the canvas where he suffered a TKO loss.

At his next outing he was matched against Liam Cleland, a renowned submissions specialist with perhaps some of the most brutal GnP on the continent. Maphutha gave Cleland a barrage that left him exhausted and infinitely lucky to escape with a DQ victory.

“I elbowed Tumelo straight in the face, repeatedly,” Cleland has been quoted as saying, “and he didn’t bat an eye. He is very, very difficult to finish.”

At EFC AFRICA 16 Maphutha was again a late replacement. There he fought the extremely experienced Wade Henderson to a split decision loss, a decision that had the crowd on their feet and booing.

Looking at three outings and three losses Maphutha was told by his camp to let his hands go, to own his Hexagon, and was given the chance when, again as a late replacement, he fought Chris du Pont. He mercilessly KO’d the Capetonian in just seven seconds.

At EFC AFRICA 20 Maphutha was asked to step in against Garreth ‘Soldierboy’ McLellan on four days’ notice. In the first round Maphutha hammered the former champion, rocking him so hard that from then on Soldierboy stayed well out of range and took the three round decision on a sniping, points strategy. Again boos against the decision rang out, and cheers for Maphutha.

“If there is one athlete that no one wants to fight right now, it’s Tumelo,” says Graeme Cartmell, EFC AFRICA matchmaker. “He’s shown that he can’t be hurt and that his fists are absolutely lethal.”

“Next time,” said Maphutha after his loss to McLellan, “I am not leaving anything to the judges. I am going to finish. I am not going to stop for anything.”

Looking at Maphutha’s record it’s clear he’s learned valuable lessons. In Chris du Pont he came to know the power he’s capable of and in McLellan he saw without doubt the openings he needs to own in order to finish. At EFC AFRICA 22, with a full camp behind him, he is one brutal prospect.

“Tumelo wants this win more than anything, it is a huge fight and opportunity,” says Howarth, “he’s evolved. JP is in for the fight of his life.”