The Time For Talk Is Over

Pena fired up for EFC AFRICA 21 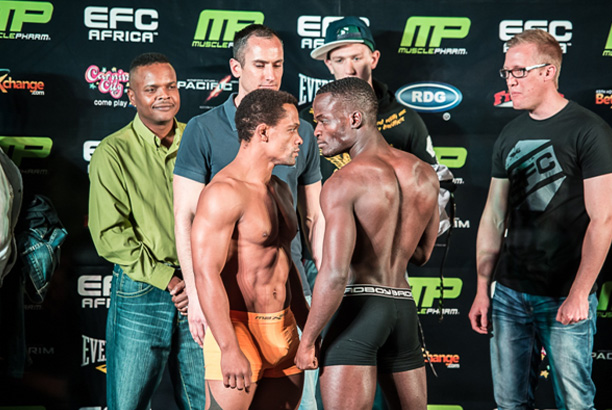 An earth shattering four heavyweight bouts are scheduled for tomorrow night and the big men were out in force today. The DRC’s Judoka black belt Vandam Mbuyi came in at 109.7kg before enjoying a massive stare down from Egypt’s hulking Abdel Karim. Tiny Strauss and Lance Ceronio both tipped the scales at over 110kgs. Judging by their butting of heads neither is in the mood to step back tomorrow night.

Former heavyweight champion and only once defeated Ruan Potts, beginning his title comeback trail tomorrow night, had his hands full with the powerfully muscled and notoriously heavy handed Mahmoud ‘Hellboy’ Hassan. Hassan sent the former champ a clear message with an ice cool stare while the crowd got vocal behind Potts.

The other favorite of the afternoon was Bernardo Mikixi, participating in the final heavyweight bout of the event, who had the crowd on their feet at his entrance. The Angolan wrecking machine has vowed that he will be taking the number one heavyweight contender spot from George native Sors Grobbelaar, a sentiment the crowd most definitely agreed with.

In a record breaking performance, all athletes made weight, meaning no more obstacles remain before 26 of Africa’s greatest warriors step into the Hexagon tomorrow night.