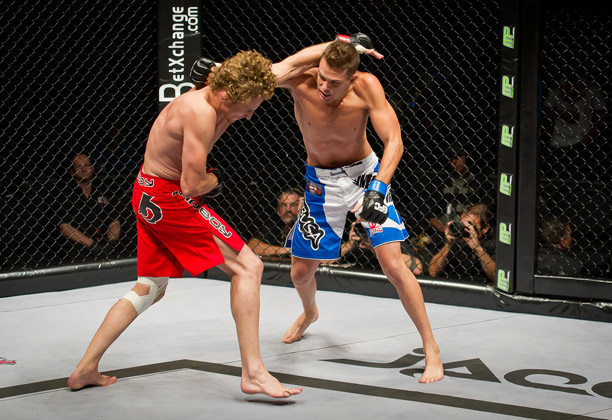 Johannesburg (South Africa) – Dino ‘The Lion’ Bagattin, former British and Commonwealth Muay Thai champion, is focused on one thing only; redemption. At EFC AFRICA 23 he faces EFC AFRICA welterweight champion Michiel Opperman for the title. They have fought before, Opperman taking it in that encounter. This time Bagattin vows he is ready.

“I have worked damn hard to get where I am today,” he said in a recent interview. “I have been fighting close on ten years. It’s blood, sweat and tears every day. I want to be the best at what I do. It’s time to take my place at the top.”

Opperman, his opponent, is as yet undefeated in the Hexagon and is currently riding a seven fight win streak. The secret to his dominance has been his spectacular skill on the ground, finishing every opponent there. Bagattin is well aware of this.

“I am digging deeper than ever before to achieve my goal,” said Bagattin. “Fixing my ground game needs commitment and I’m doing exactly that. I’m no slouch on the ground and it’s time to prove it.”

Bagattin and Opperman faced each other at EFC AFRICA12. There Bagattin remembers controlling proceedings with strikes until a mistake and a submission from Opperman in the second round. This time, he assured, things will be very different.

“I’m looking for redemption,” he said. “Last time Michiel got lucky. The fact that he was a late opponent change and I wasn’t prepared for his ground game was the telling factor. This time I’ll be prepared.”

On that occasion Bagattin stepped in as a late replacement for Martin van Staden. At that stage he was still in the midst of making the transition from Muay Thai fighter to a fully rounded MMA athlete – a change that the champion, as a former Kyukoshun Karate world champion, has completed.

“Michiel is a great athlete and at the top of his game right now,” said Bagattin. “He did what I’m only doing only now and worked on his ground game years ago. Him being one of the top freestyle grapplers in S.A is testament to that.”

“I’m prepared to go to hell and back,” Bagattin continued. “I’m pushing myself harder than ever in every session to assure I am comfortable in a very dark place. Michiel can expect the fight of his life. I didn’t call myself ‘The Lion’, it was given to me by my first Muay Thai coach and everyone has seen why. I have grown and matured in this sport and in my division, my time is now.”

“Michiel,” the challenger says finally, “I’m coming to fight you.”