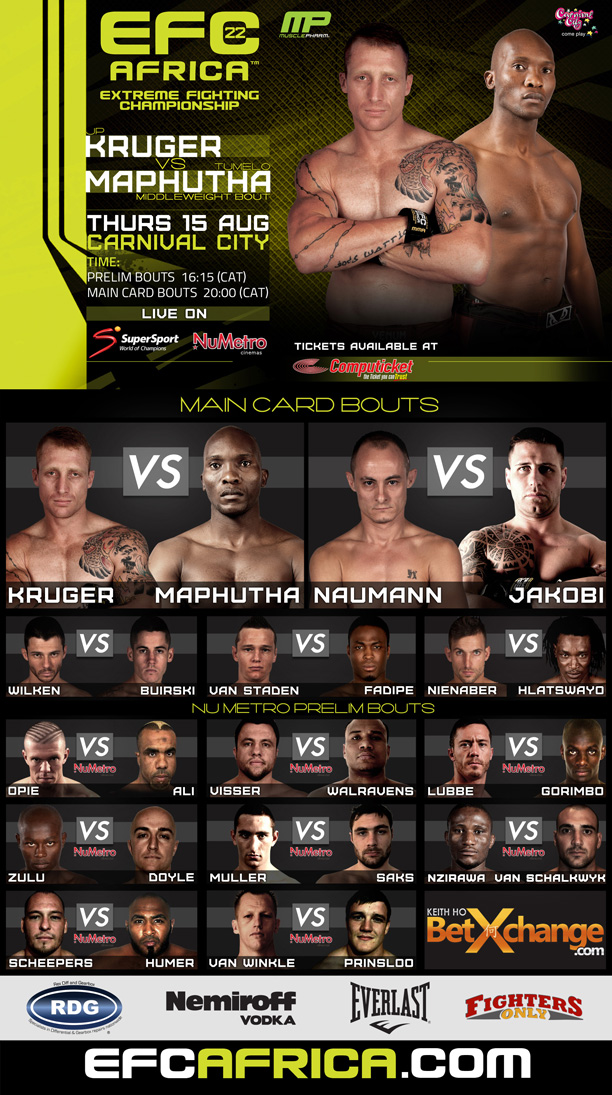 Johannesburg (South Africa) – This Thursday, at EFC AFRICA 22, 26 of Africa’s greatest warriors descend on Johannesburg’s Carnival City to do battle in the Hexagon.

Martin ‘The Punisher’ van Staden gets the chance to put action to his words when he faces Nigerian born, Ireland based Henry ‘Herculeez’ Fadipe, an athlete that unleashed a storm of smacktalk from the Punisher after accusing the 20-7 veteran of having no respect.

The bantamweights undergo a massive reshuffle as the bad blood feud between Donnovan Wilken and Matthew Buirski is finally given the chance to explode, and on the prelim card Johannesburg born, UK based, former TUF contestant Fraser ‘The Omen’ Opie finally makes his African debut, up against Egypt’s devastating Mohamed ‘Felx’ Ali, the man with a string of first and second round stoppages behind him.

Here’s a list of highlights to look out for in the final lead up.

Betting on all EFC AFRICA 22 bouts opens at www.betxchange.co.za

EFC AFRICA 22 Post Event Press Conference. Commencing 30 minutes after the event and held in Carnival City’s Sports Bar, media and fans are invited to attend and listen to the main card athlete’s views on their bouts, as well as KO, Fight and Submission of the night winners.

How to watch EFC AFRICA 22 live: