“I can’t wait to test my skills against this guy” 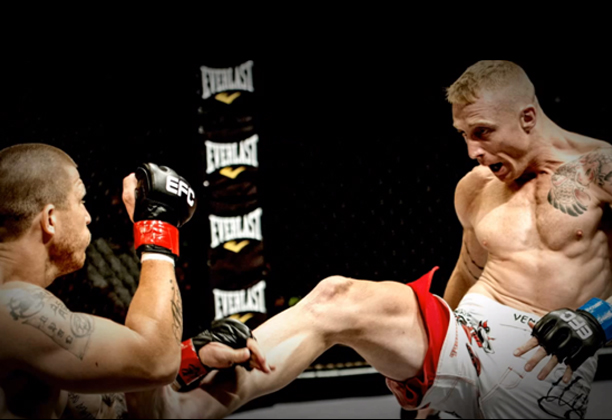 Kruger is widely regarded as one of the brightest talents in the middleweight division, and with his unbeaten streak also widely seen as the rightful number one contender to Jeremy Smith’s title. Due to an injury sustained in his first round submission victory over Donavin Hawkey at EFC AFRICA 18, however, he has been out of action for the last four months, forced to watch from the sidelines as Garreth McLellan confirmed his title shot with his decision victory over Maphutha at EFC AFRICA 20.

“I don’t think Garreth thought Tumelo would be that tough,” said Kruger of that encounter. “He was given a surprise. You never, ever, underestimate any opponent, especially anyone in EFC AFRICA. They’re here for a reason.”

“I’m coming out and I’m expecting Tumelo to bring one hell of a war,” he said when asked what he thought of the skills of Maphutha. “He’s a big strong guy. He’s a K1 striker. He’s a very good, strong, legit powerhouse. A lot of the fights he’s lost people in the crowd could easily have said he’s been robbed. He’s definitely a force to be reckoned with.”

“I don’t think this fight is going to go the rounds. I think one of us is going to knock the other out. If it went five rounds that would suck, right? We’re both K1 fighters, so let’s do it. I’ll leave what that means in terms of my game plan to the crowd’s imagination.”

Kruger has been in fight camp for the last two months, and says his preparations have gone excellently. “I’m feeling strong. This is my last week of pushing it. I’m feeling calm, feeling ready, this is going to be a good fight. I’m looking forward to going out and testing my skills against this guy.”

When asked if he had any words for Maphutha, Kruger responded:

“I don’t trash talk,” he said. “Before the fight, I’m a nice guy, when I get in there, I’ll become an animal. Everybody’s talking about Tumelo coming out to punch my head off.” He laughs. “What do they think I’m going to do, come out and bake cookies? Let the Lord Jesus bless him and his camp, and on the night, I’m coming. I hope the Lord’s favour falls on me on the night.”