Mdoku Up For A Hard Fight 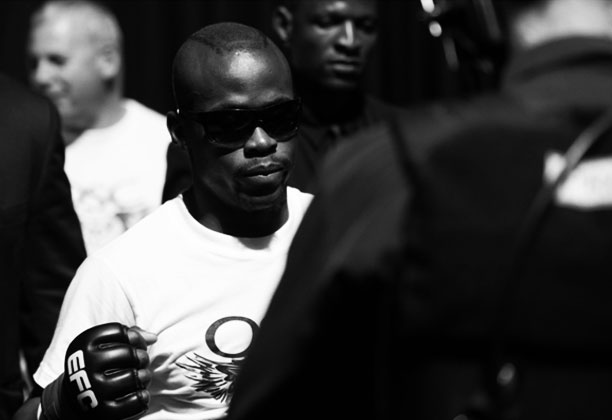 Sibusiso Mdoku before his last bout

Johannesburg (South Africa) – Sibusiso Mdoko made his debut at EFC AFRICA 20. He took the fight against a former title contender on a weeks’ notice, facing the highly skilled and vastly experienced Alex Cheboub. Few gave the new man much of a chance. Instead the two treated fans to an incredible exhibition of all round MMA, a performance that nearly took fight of the night, and in which Mdoko lost out on a hair’s breadth decision.

Mdoku was shattered after the announcement of his loss. In a fight that went the distance, and perhaps hinged only on his inexperienced error where he was docked a point for holding the fence in the second round, he put on a show that marked him as a man to watch.

On 12 September he faces another monumental challenge in the unyielding grit of Johan van Staden. Van Staden is a perennial contender. At EFC AFRICA 20 he took Frederich Naumann three rounds and lost to a narrow decision. At EFC AFRICA 21 he shattered Steven Momah with decisive ground pressure, finally TKO’ing the Nigerian in the third.

Mdoku’s camp is eager for the challenge of Van Staden, and open about what they want from the fight.

“We’re going to take him to the ground and GnP him until he gives up,” said Mdoku’s coach, Anthony Kettle. “We’re up for a hard fight. Johan is a seasoned campaigner. We know he’s experienced, that’s what we want. The fans are going to see an animal out there.”

“I’m going to bring it,” said Van Staden in response. “No one climbs into the Hex unless they think they have a chance, so I’m looking forward to this. He doesn’t have the tools to beat me, he doesn’t have the experience. If he thinks he’s got this one, he’ll have to get that out of his head.”

This bout can be seen live at Carnival City, Johannesburg, or larger than life, in full HD, at selected Nu Metro cinemas throughout South Africa. Alternatively, stream Van Staden vs. Mdoku live at efcworldwide.com/efc_africa_404.php from anywhere in the world.